Grandmothers and their Photo Albums.

I’ve heard stories about getting stuck on an airplane next to a grandma with her weapons-grade photo album, pinned to the seat back by her stories about this grandson, that granddaughter, these nieces and nephews, for hour after painful hour. My wife tells me that I’ll be just as bad when I have grandchildren, but until then (at least), grandmothers make me nervous. 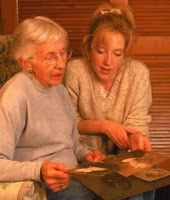 The other day, God did just that. I was in a worship service, and it was like God pulled out His photo album for the people in the room. He would draw my attention to one person after another in the room, and it was like He was showing me page after page of photos about them, what He loved about them, some of the fun things that He had done (or could have done) with them. I could feel His affection for them!

Sometimes I think prophetic gifts are treated too importantly, if that’s possible. We hold out for the profound prophetic word that will impact the whole room. While those words are wonderful and often powerful to the point of changing lives, they miss the aspect of the prophetic that I think is the most powerful: they miss God’s revelation of His own heart.

I’m convinced that the primary purpose of the prophetic is that we would get to know not just His plans, His works, but also His ways, the “why” behind the things that He plans and does. The primary reason He shares things with us is so that we would get close enough to Him to know the things that are important to Him, because unless we know Him, we won’t be able to love Him.
Share