A Lesson on Our Angels.

I love testimonies. They say so much good stuff about God! And the whole concept of “testimony” (“μαρτυρία,” an interesting word on several levels) includes the concept of “What God has done, he is willing to do again.” I love that.

I was watching over a baby-Christian who was dying. She was 90 years old, freshly saved, and had just been diagnosed with cancer. When I asked, Father said, “The cancer will not take her, but it is her time to go.”

As I said, she was dying, but she was taking her time about it. She had been in dancing on the edge of Eternity for several weeks; it was hard on her and everyone who loved her to watch her suffer. I came to visit her again, and she never saw me, but she grasped my hand weakly as I sat with her and prayed for her. The room was full of a measure of peace, and I loved her. I wanted her to be able to lay hold of that peace.

I needed God’s perspective, so after a while, I walked over and stood by the door, ducked into the Spirit realm, and talked with Father about it. “What’s holding her back, Father?” and immediately I had a vision. There in the spirit realm, she was travelling a winding road in the midst of fields of wildflowers, and she was almost to the bridge. But there were several demons who were holding her back, taunting and tormenting her in the process. I understood that they were gaining some strength from their torment of her. It angered me.

“What do I do, Father? I’m seriously not ready to pray for her to die, even though you’ve already told me that this is her time.”

What followed was one of the more startling experiences of my life with God. He said, “Release our angels to clear the way for her,” and with that one sentence, a whole lesson was downloaded into my spirit.

A little background: I was raised in a liberal church, and then trained in an evangelical church, both of which adamantly, fanatically, insisted that I must never pay attention, especially never try to communicate with or (horrors!) command angels! Oh my goodness! That would be tantamount to abandoning faith in God in favor of gibbering in the corner with tinfoil on my head. Those who taught me had encountered people who had gone way off the deep end about angels, always talking to angels, always listening for what the angels said. Some of them actually had worn tinfoil on their heads and chosen to sleep under bridges. Bluntly, this was a doctrine built on fear, but it was the doctrine I had been raised on, and God was countermanding it.

So with the instruction to “Release OUR angels…,” Father schooled me. He took me through several scriptures, in that nanosecond. The conversation went like this: “Angels are servants of the Kingdom, yes?” “Okaaay.” “And you’re an heir of the Kingdom, yes?” “Yeaaaah.” “Are you doing the work of the kingdom, working to accomplish My will?” “Yes!” “Well, then the angels are available to serve you in this!” “Oh! Okay!”

I stood there at the door, my eyes bugging just a little, thinking through what I’d just heard. If I understood correctly, I had specifically been invited by my Heavenly Father to – not command, exactly – but “release” the angels to do the thing that Father had already assigned them to do. And as a result, again, if I understood correctly, my aged friend would then die. Yeah, she’d be with Jesus, yeah, it was her time, but dang! 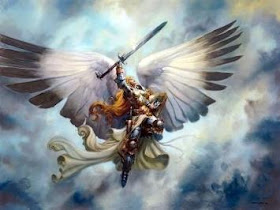 I reached over, touched her cheek, stood back up, took a deep breath. I looked Father in his tender-hearted eyes, and spoke. “As a son of the Kingdom, and in the Name of Jesus, I release the angels that Father has assigned to this woman to carry out their assignments and to remove the demons hindering her.”

The next morning, we got the call. “She has passed over.” We met the hospice nurses there. My friend had the most peaceful expression on her face. She'd crossed the bridge in joy.

When a personal revelation is supported, as this one was, both by scriptural principles and by the way actual facts turn out, I pay attention. But I wasn’t settled on it so quickly.

We talked about it afterward, and as we debriefed, Father and I talked about Matthew 26:53. That’s where, in the Garden, Jesus declares, “Or do you think that I cannot now pray to My Father, and He will provide Me with more than twelve legions of angels?” I’ve always dismissed that verse: He’s the Son of God, He can do things I can’t.

“My child, yes, Jesus is My Incarnate Son. But when He came to Earth, He emptied Himself of the prerogatives of his deity. His ministry on Earth was not as God incarnate: that would be nothing that you could ever aspire to; it would be no model of what you could do and be. Everything He did on Earth, He did as a man. Son, don’t write his example off so quickly.”