This has been on my mind for a while.

Where our Owners’ Manual speaks of the battle (in Ephesians 6), it’s very specific: the victor is defined as the one still standing when the dust settles. 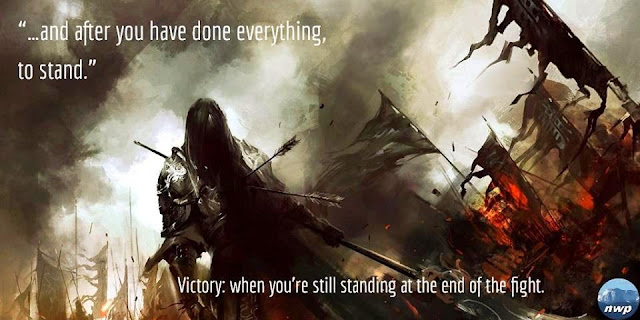 So if you’re battered and bloody and discouraged and weary when the fighting stops, that’s normal. If you’re still standing, you’re the victor.

We tend to think “victory” means that we’re still humming a happy tune, the birds are still singing and our armor is still shiny.

Bah! Shiny armor means you haven’t been in a real battle yet. And the birds will sing again when it’s time. And you can always choose what kind of tune you want to hum.

Not so much. What it means is that you’re still standing.

Look at our own example of “more than a conqueror.” He wore the crown of thorns and not a scrap of cloth as he dangled bloody, groaning “It is finished.” That’s our example. That’s our Forerunner. That’s our King.

Have you fallen and you’re not getting up? That’s not winning. I don’t care who’s fault it is. Lying there, staying there, with your face in the mud and blood is not victory.

Having face-planted, and then struggled to your feet as the angels mopped up the battle, even if you need three others to help you to your feet, that’s victory. That’s more than a conqueror.