Collateral Damage From Someone Else's Errors

In Genesis 14, the king of and some other kings went out to war, to oppose an invading horde that was conquering the region.

They lost, so the conquering horde plundered the cities of the losing kings. was plundered by the invaders: the riches (“goods”) of the town, and they hauled off the people to be their slaves.

As part of their plundering, they carried off Abraham’s nephew , who lived some distance away from the cities in the valley. 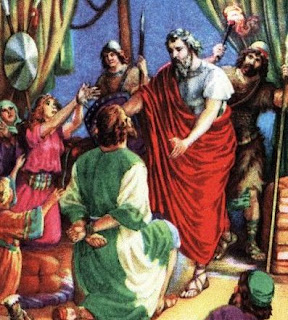 Abraham gathered up his own army, drawing heavily on his employees and friends, and defeated the invading horde that had just conquered and plundered the valley.

I’ve read this story (1) a thousand times. This morning, some new thoughts crossed my mind.

• was not part of the war, but he was taken in the plundering anyway. I’m feeling Father inviting me to look at the war going on around me: is it my war, or am I being plundered because of someone else’s war?

• Uncle Abraham wasn’t trying to rescue five kings and five cities. He was rescuing his nephew (2). It also happens that we experience breakthrough as a side-effect of someone else’s breakthrough. Those might be worth looking for, too.

• I observe that Abraham’s relationships based on relationship, rather than on gathering for warfare. (3) (They were “allies”; Hebrew: “Men of covenant.”) At least in this situation, the covenant relationship seemed to contribute to the victory in battle over what appeared to be superior forces.

• That happened to Lot a second time a few chapters later, but this time (thanks to Uncle Abraham’s prayers), the angels chased & his family out of the city before the city was destroyed. This time, was nearly destroyed by the consequences of someone else’s sins (4).

• When & were destroyed, that was “Because the outcry against [them] is great.” It was in direct response to somebody’s crying out over the city. (5)  The things we say about a city will have great consequences. In this vein, I’m tired of folks cursing , DC and . Personally, I guard my mouth against even casually saying things that, if taken literally, would result in “stealing killing and destruction;” that’s someone else’s job and I WILL NOT help him. (5½)

• It was Abraham’s prayers for the people of & that spared & his family. I suspect that if he’d had the nerve to keep going, he could have averted the entire judgment, but that is only conjecture. Clearly God does look for people to cry for mercy. (6) It’s probably good to be one of the people that cry for mercy. God goes out of his way to find these folks.

The Great Cloud of Witnesses: An Exercise

Hebrews 12 begins with this image: “Therefore, since we are surrounded by such a great cloud of witnesses, let us throw off everything that hinders and the sin that so easily entangles. And let us run with perseverance the race marked out for us.”

I’ve been reflecting on that great cloud of witnesses. This passage starts with “Therefore,” which means “Because of what we’ve just talked about....” All of Hebrews 12 rests on the foundation of Hebrews 11, the “Hall of Faith.”

The great cloud of witnesses, then, is all the saints of God that have gone before us: the famous ones, the great ones, the ordinary ones, the nobodies. By now that’s several billion witnesses that are watching us run our race. Some of them are my predecessors, though it may take a number of generations before I find the interesting ones.

• The exercise that I’m working on this morning is reflecting on specific “whos” that are among that great crowd. Most of these are family members that have gone before me. In my line, there were some preachers several centuries ago, and Sunday school teachers in more recent years, and I know of one or two forbears whose names show up in history books. I’m thinking of them.

• And I’m thinking specifically of them witnessing my race, my life, my choices. I absolutely reject the idea of making my choices because of how it looks to others, even to them, so that’s not it. But I consider their thoughts and feelings as their look on their great (or more) grandson. Are they embarrassed? (What would they be embarrassed about? Heaven has already blotted out my sins!) Are they cheering me on? They’re probably not bored!

• Most of all, I’m trying to look at my life from their perspective: They see the great plan of God. They see history from beginning to end as they’re watching me. What do they see in my life (which is different than what I see in my life) that relates to the great plans of God.

My encouragement then is to take some time and ask Holy Spirit to show me some of what’s going on as the great cloud of witnesses watch me, and specifically as these witnesses that I can think of are watching me, what’s their response to me? Are they cheering? Can they offer strength or encouragement?

This crosses my mind: “What do family members do when they’re watching one of their kids or grandkids running a race? Especially, what do they do when they are approaching the end of the race?” Why they stand up and cheer, don’t they?

Do you see them cheering for you? Can you hear them? Can you feel their joy in you? Their pride in you? Their excitement as your race is approaching that next interesting thing in the purposes of our mutual King?

If you try this, what do you experience? What do you see? What do you hear? Who’s cheering the loudest? Who’s poking the angels and pointing you out?