I confess, I have some obstacles with how we pray about those events we refer to as natural disasters.

First let me clarify: it's clear to me that we do have both the obligation and the authority to speak to natural disasters and effect change there. I'm just not convinced it's wise planet management to always speak to every act of nature that inconveniences man.

Our species, the race of mankind, is responsible for what happens on this planet. We were delegated that responsibility by the planet's Creator. It's a pretty serious thing, and I take that seriously.

So yes, natural disasters are within the sphere of our responsibility.

Thus far in our maturation as a people of God, I observe three primary ways we deal with natural disasters:

1.  We ignore them, because they happen to other people, other places (or because we don't know any better), or

2.  We panic before the disaster and mourn and wail after it. or

3.  We decide that this event is a bad thing, and rebuke it (with varying results; we're still learning).

In point of fact, an argument can be made for each of these reactions at different times, though I have hesitation about how healthy each of them actually is as a default response. 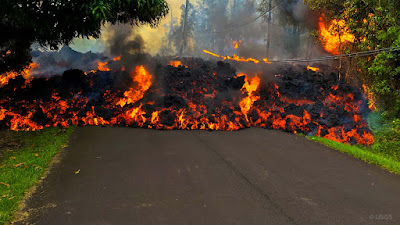 But the issue that's got me scratching my fuzzy head today is this: where, in this process, do we perform our evaluation of the situation? Where do we assess how much our involvement is actually necessary, and what the best intervention might be?

We live on a planet that has a very long history of things happening to it. Since before Adam and Eve took their first job assignment, the planet has been active: storms spreading water around, volcanoes adding to land masses, forest fires cleaning up the leftovers of life in a busy forest, earthquakes from tectonic plates jostling. You know, those things.

And when mankind stepped onto the stage, we renamed them. Suddenly, they were no longer our planet doing what our planet has always done. Now, suddenly, these are "disasters."

If we want to get overly anthromorphic, we can talk about whether it's fair to the planet to suddenly redefine what had always been its healthy processes, I suppose. I figure that's something analogous to deciding that poop is icky, and making the decision never to poop again. There might be side effects.

Or we could consider how reasonable our expectation is that the planet should suddenly change how the water cycle works, or how it cleans up after itself, or how the planet's geology works, just because our species is covering the planet now and might be inconvenienced by the planet's natural processes.

Here's my point: I don't subscribe to the concept that just because there's a storm, just because that storm soaks soaks cities, blows down houses or destroys a season's crops does not automatically mean that we need to shut the storm down.

There were three experiences that led me to challenge my previous (and in my opinion, irresponsible) practices:

The first lesson came on an extended canoe trip. It had been raining hard enough that we couldn't safely travel the unfamiliar river, so we were stuck in our tiny tents in the rainstorm. The third day, I'd had enough, and I asked Father to stop the rain so he & I could go for a walk.

After a wonderful three hours with him, I noticed the sky: a huge rainstorm was coming in from the east, but just before it reached me, the clouds parted and went around me. I turned around and saw where the storm joined together just west of me. Every place around me was getting well watered, but I'd walked in sunshine for several hours, because Father pushed the storm aside for a little while. The storm was not stopped, only diverted for a couple of hours.

The second lesson came when a couple of very credible prophets warned about a devastating earthquake coming to my region. We live on The Ring of Fire, the planet's earthquake zone, so quakes aren't terribly rare, but this was going to be terrible.

A few intercessors for our region got together, sought God's counsel, and diffused the threat. His instructions were to a) cancel the assignment of the spirit of fear that was riding the (very public) conversation about the quake, and to b) redirect the pent-up tension in the tectonic plates involved so that the release of that tension would not be a terrible quake, but would be diffused in a large number of small quakes.

We did that and the stories stopped, the prophecies stopped, and the USGS commented on the unusual number of moderate quakes in the region. Crisis averted, but not by the brute force of stopping the tectonic plates from moving; by redirecting that energy to nondestructive symptoms.

The third lesson involved a very scary storm heading for a busy coastline. Father instructed us not to pray to stop the storm, but to turn the storm. The next day, the weather forecasters scrambled to explain the unexpected change in the storm's path to their thousands of relieved viewers.

In addition, I've taken some lessons from the realm of physics. I've realized that a great amount of "potential energy" or a great "inertia" can be more easily redirected than simply stopped in its tracks.

To stop a great storm in its tracks would literally require the equivalent atmospheric energy of several hundred thermonuclear detonations, and even if you managed to handle that power well with your prayers, you'd probably end up with scraps, several smaller storms spinning off causing less news-worthy damage in a number of smaller locations. That's a lot of work, whether it's in the natural or in the supernatural. And it's likely to be untidy.

But to change the storm's path, that requires a much smaller miracle, some say the flap of a butterfly's wings, properly applied, might be enough.

So if I've got a family picnic scheduled for this weekend, and there's a very wet weather front on a collision course with my picnic, is it appropriate to exert the requisite energy to stop the weather front, or to stop the front from dropping its rain? That might be a serious disappointment to the farmers in my region who are counting on that rain for their orchards and crops, and to the fish who live and breed in the streams and rivers.

And then, what would happen to the water that would normally have fallen in my region? It would be carried to some other region that isn't used to as much rain. How does the importance of my picnic stack up against frightening and unexpected weather patterns for my neighbors?

Or would it be better to just shift the storm? Shift it early enough and you only need to bump it off course by a few degrees. Not being omniscient myself, I confess that I don't really know what the effects of that would be.

Or should I leave Father's watering system in place, and just find a new location, perhaps one under cover, for the family gathering.

I'm not arguing that one answer is better than another. I am arguing that if we're going to take our responsibility to rule over creation seriously, we need to ask these questions.

"Yep. That looks like a problem. What are the available options to deal with it? Which option looks to be the best, and how do I implement that option?"

I recommend consulting with our omniscient Father on such matters. He has millennia of experience dealing with weather (and forest fires and earthquakes and floods and....). And he likes to keep his hand in matters of this sort.
No comments: