Fight the Good fight of Faith

When we don’t question our beliefs, when we just accept what others have told us (whether from a pulpit, from a seminary, or from a publication), there are repercussions well beyond our own belief structures.

Some of the things that we’ve unquestioningly believed for a few generations have functioned as incredible obstacles for people who don’t know God’s nature; some of these people take our un-questioned beliefs literally, point out the very logical failures of those beliefs, and cause formidable damage to our Father’s reputation on the Earth.

One of those beliefs is the version of hell that was primarily outlined by an unbalanced Catholic politician, pharmacist and monk in the 14th century. His imagination was brilliant, but not particularly either Biblical or true. These details which did not trouble him, but his writings have been (probably unintentionally) adopted by the “turn or burn” evangelists as the default definition of “burn.”

Their depictions of Heaven were similarly unbiblical, and similarly designed to maximize the number of people running to the altar at the end of the service.

The result of such haphazard doctrinal foolishness included a large number of “converts” eager to escape this horrendous and unbiblical threat, often described as “buying fire insurance,” which, of course, was never God’s goal.

My hope is that we will ask questions about what we’re being taught, to test the doctrines that teachers are telling us are “The Truth.”

·         One of the best ways to test our belief sets – in addition to questioning their conformity to Scripture’s simple contextual instruction on the topic – is to examine the fruit of the doctrine. And examine the fruit of that doctrine among believers and among non-believers: does this doctrine increase people’s love for God and love for each other, or does it regularly result in resentment, legalism, judgment, generally keeping people from embracing God’s love for them.

This is part of Paul’s admonitions to his apostolic leaders: “Pay no attention to … myths or to the merely human commands of those who reject the truth.” “Fight the good fight of the faith. Take hold of the eternal life to which you were called.”

The best part of the conversation will be on Facebook. Come join in.
No comments:

Explosions All Around Us

Some folks among us have had violent, “earth shaking” events in their lives recently. Some have been asking, “Why Lord? Why me?”

A good gardener (or “husbandman”) has many tools at his disposal, some which are not intuitive.

Our gardener has been preparing some of us for growth by detonating charges around us, even underneath us. Sometimes, all we see is the explosions going off around us, showering us and those around us with detritus.

Occasionally, we may see our bearded Gardener, twinkle in his eye, as he stands back from a freshly lit fuse. It’s easy to suspect that he’s bringing harm from the detonation, and this is undoubtedly where we get the idea that God works to harm us. 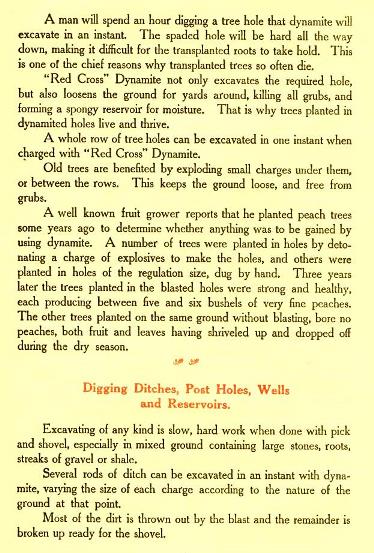 It’s true that God allows in his wisdom many things that he could, by his power, prevent from happening to us. And it’s likely that he does set off some of the blasts that startle us and discombobulate us.

But it is always for our good. The blasts that throw dirt all over our carefully planned lives loosen the dirt around our roots, making room for fresh growth, fresh nourishment, and from there, fresh fruit.

And those explosions that disturb our peace and frustrate our own plans often kill off the grubs that chew on our roots, the little foxes that spoil the vines, the demons that contentedly prey on our hopes and our fruitfulness.

The reality is that if we’ve been praying for “more of God,” for “more fruit,” or for “expanded tentpegs,” then these jolting and disheveling explosions may be the answer to our prayers. They’re making room for growth, easier growth, in our lives.

Maybe it’s time to give thanks for the earth shaking events in our lives, or at least for the results of them.
1 comment:

Learn This Parable from the Fig Tree

I love it when God speaks through secular artists.

The Pixies have some strange songs. One begins with the lines,

“Meet me by the coppice stool
Before the sky takes back its jewels
Bring your life of memories
Before they sink into the seas.”
(https://youtu.be/IAxqFo59TBs)

There were two or three interesting thoughts in here, but it was the first line that spoke to me. “Meet me by the coppice stool.” What on earth is a “coppice stool”?

Some years ago, Father really challenged me from the parable of the fig tree in Luke 13:

"A certain man had a fig tree planted in his vineyard, and he came seeking fruit on it and found none. "Then he said to the keeper of his vineyard, 'Look, for three years I have come seeking fruit on this fig tree and find none. Cut it down; why does it use up the ground?' "But he answered and said to him, 'Sir, let it alone this year also, until I dig around it and fertilize it. 'And if it bears fruit, well. But if not, after that you can cut it down.' " [Luke 13:6-9]

(By the way, if you ever find yourself asking “why is there so much crap going on in my life?” remember that manure was the fertilizer that Jesus was speaking about digging into the life of the fig tree.)

I meditated on the parable, of course. Then one day, while I was driving, I saw a piece of property where the owner had cut down some trees, but the stump was sprouting again. Even the logs stacked next to the stump were sprouting, and I realized, that must be how fig trees work.

So I googled it, and found it’s true: you can’t actually kill a fig tree by cutting it down. When you cut a fig tree down, you give the tree a fresh start, several fresh starts, actually. Because within several months of cutting down the tree, you’ll have several new trees sprouting from the same roots, surrounding the trunk. Instead of one old, slow-growing tree, you’ll have several young, vigorously growing trees.

This method of extreme pruning is called “coppicing.” And that dead stump, surrounded by live trees from the same roots, is called a “coppice stool.” It’s a recognized forest management technique. “As  coppiced trees already have a fully developed root system, regrowth is rapid.” In fact, “trees which are periodically cut tend to live longer.” (http://www.coppice.co.uk/)

So one reason that God may cut someone off at the roots is to extend both the breadth and length of their ministry. Another reason may be to bring back “the joy of my salvation” to saints that have grown weary or complacent.

So if you’re feeling like God is cutting you down (or just digging crap into your life), take heart: he’s preparing you for growth and expansion.

We Have Room to Grow in Our Prayers

I learned some things recently. I probably shouldn’t be surprised, but I was.

I’d started a discussion about “What one thing would you pray for Hillary Clinton?” (That conversation is here: http://nwp.link/FB-PFHillary .)

We had a handful of folks ignore the question and rage – sometimes for, mostly against – Hillary-the-Candidate. And we had a pretty substantial number of “prayers” that were political rants in disguise.

I get that: people have been trained to have strong opinions about this election. That always happens. Moving on…

The majority of people didn’t do that; the majority of folks prayed for Hillary, or described a hypothetical prayer. And that’s where my eyes were opened.

I was struck by the nature of those prayers. Out of a hundred or so responses, the vast majority (>90%+) of the responses apart from the political comments roughly fit into one of two religious categories:
Or some variation of these two. (Full disclosure: my own prayers were in these two categories too.) They were proper religious prayers. They’re the things we’re told we “should” be praying for.

These all begin with the assumption that “Mrs Clinton is messed up, and she needs me to fix her, and let me tell you how I’d fixer, cuz I’d fix her good!”

May I be honest? These feel a whole lot like we’ve been praying, “Make her more like us!”

And that always carries the intrinsic assumption of “You’re not as good as I am. You need to be better, like I am.”

Ewww. That is, by nature, something of a curse, not a blessing.

Reading through all the prayers (and I have, many, many times) leaves me feeling like I need a bath.

Relatively few responses were addressing actual issues that Mrs. Clinton is facing: health, destiny, goodness, protection, provision.  These were so terribly refreshing! These carried life, hope, faith, and (dare I say it?) love. These were the prayers I found myself feeling proud of (and they weren’t my prayers!).

This draws my attention to at least one reason why political leaders don’t like to listen to Christians: our communication (to them, among ourselves about them) is pretty unambiguous: We think we’re better than you. We’re going to fix you with our talk, with our prayers.

Our interaction with “the world” is so very seldom actually focused on their needs, their wants, their situation. Our interaction is pretty strongly “all about us.”

And in reality, it isn’t even a little bit “all about us.” Not to them. It needs to be an awful lot “about them,” if we’re going to actually connect with them.

Otherwise, we’re wasting their time and ours.

The best part of the conversation will be on Facebook. Come join in.