The Light in the Darkness

Think with me for a moment.

Romans 5:20(b) declares, “…where sin abounded, grace abounded much more….” This time it’s in the presence of sin that is emphasized as the place of great provision (“abounded” is a big word!).

Luke 7:34 describes how the ungodly saw Jesus: “The Son of Man has come eating and drinking, and you say, ‘Look, a glutton and a winebibber, a friend of tax collectors and sinners!’” Apparently, Jesus frequented such places, and hung out with such people. I’ll bet that he still does.

Let’s think about it: when I’m feeling weak and needy, and I need an extra dose of the grace of God, where shall I go?

First, let’s nip some potential problems in the bud:

·         We also don’t go get in a place where we’re are personally, severely tempted to sin. That’s just plain stupid. If you don’t want to get shot, don’t wander onto the firing range.

·         We don’t place ourselves or those with us in real danger, whether physical or not.

Traditional religion has always said, “If you need more of God, you go to church, where God is, of course.” That, of course, presupposes that God is more present in a particular building more than in his son or daughter, and I’m not sure that this can be supported Biblically. If there are good people at church who can help you, that’s great, though you’ll probably be able to deal with the issues you face better meeting with them outside of the church’s programs. Just an opinion.

But our verses hint at something else: God’s presence can be found unusually strong in other places, places where “my enemies” gather, places where people are not afraid to sin.

I reiterate: we don’t choose to put ourselves in danger: if there’s a temptation that’s hard for us, don’t go to that place. But just because sinners gather there is not a reason to avoid a place: Jesus didn’t avoid those places (cf Luke 7:34). (And there’s always the “go” part of the great commission that so often gets overlooked.)

This is, frankly, not an exercise for spiritual babes. And it’s a good time not to practice 2 Peter 2:22 (“But it has happened to them according to the true proverb: ‘A dog returns to his own vomit,” and, “a sow, having washed, to her wallowing in the mire.’”).

Some would argue that such places are indeed more full of God’s grace, but it’s because they also provide a greater need for God’s grace, and the two influences balance out, leaving the believer no better off than s/he would be at home in bed. That’s actually not a foolish argument, but neither is it conclusive; it’s absolutely worth considering, and perhaps field-testing. 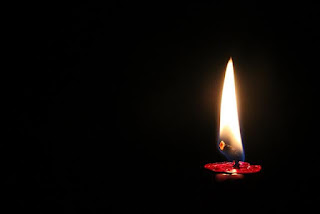 In the town where I live, there’s an austere micro-beer tavern near the famously-liberal, liberal arts state college. So naturally, it’s full of non-Christian and anti-Christian college students, expounding on their views over admittedly delicious brown brewed beverages. There’s an old-world coffee lounge downtown that caters to the more permanent residents of similar persuasion, who expound their views over similarly delicious brown brewed beverages of another nature.

I’ve found that both places are excellent places to bring my laptop or a Bible and enjoy the Father’s healing presence and think creatively with him. The tavern is also hosting a number of Bible studies and “cell-group” type fellowships, so maybe the word is getting out.

On the other end of the scale, some friends and I occasionally visit dance clubs for the purpose of spiritual warfare dance, specifically counting on a table of provision being prepared before us in the presence of the spiritual environment found in those places. From a natural viewpoint, we look ridiculous: a bunch of overweight shaggy old men – I wear earplugs – completely ignoring the writhing young people around us on the dance floor. But it is has been a marvelous place for engaging the heavenlies, and the temptations there don’t even speak to us. (Note: we don’t do this alone, and we don’t go without substantial prayer covering.)


I’ve also surprised myself with this discovery: the secular German band Rammstein is actually pretty good for worship. I can’t understand the words, so it’s as if it was instrumental music to me, and I enjoy the table prepared for intimacy with Father in that dark place.

And of course, God is still committed to the Great Commission, which still begins with “Go ye….” The command is still to take the light to the places of darkness. I’m convinced that one of the reasons that so many Christians are so ineffective at sharing the gospel with non-believers is that they don’t actually meet any non-believers. When we bring the light into the darkness, the light is quite a lot brighter than when we put all of the lights into a big room that is outside of the world of unbelievers.

Now, I have known of a number of men who have heretofore been effective in the Kingdom who have been discouraged, and wandered into similar places specifically in order to find temptation, which they do in fact find, and which has all too often led to moral failure. This, of course, is the danger of finding the presence of God in the places of darkness, and it is for this reason that caution is to be exercised.

You know just last week- I believe the Lord was dealing with me about being able to walk into a bar at His direction. Long story this week I was wondering that paul would become all things so that he could win people to Christ.how we are told to eat whatever set before us ect. the religious constraints and standards of churches though balanced in some ways may well be very out of balance as many times those that would go to such places. Are shunned persecuted and thought always backslidden christioans which is not always the case and tour right spiritual maturity and an ability to hear and respond to God is essential. Last year I noticed how many churches turned in on themselves and where really only led many times to support the ministers vision this is a Tragedy that involves eternal losses in both reward and lives for the kingdom I liked you article thanks