Homosexuals And the Move of God

There’s been a lot of talk about an increase in the movement of God on the earth, and how this is the beginning of a new “wave” of God’s interaction with this planet.

Recently, someone asked me a good question: “Where do gay people fit in the next wave? I heard one prophet say they will be a part of it, and they won’t necessarily be delivered, but that they too can walk with Jesus and be filled with the Spirit. Will the next wave deliver them, empower them wherever they are at, help them live single, or something else?”

The testimonies, from reliable sources, are of churches, filled with the Spirit of God, among the homosexual community. (The testimonies, like the churches themselves, are not in the public eye because of all of the wrath they have received from the religious community.)

I’m committed to learning from others’ testimonies (http://j.mp/WUa9gS), so I will not reject these testimonies. In point of fact, they are fulfillment of prophetic words from myself and others, and fulfillment of God’s promise that he would call people to himself from the ends of the earth.

So where do homosexual churches fit into this next move of God? For right now, I’ll employ a new phrase that I’ve only just learned: “I don’t know.” (Whew. It feels good to say that.)

I’ve spoken out publicly about two characteristics that I (believe I) know about the coming wave:

1) It’s going to be so different than what we’ve experienced before and what we expect, that it will be hard for most of us to recognize.

2) It’s going to be so big that it’s kind of overwhelming.

When you combine those two, it makes for a real mess: outspoken church leaders who are overwhelmed by things they don’t understand or recognize. That ought to be interesting. Perhaps MacArthur’s “Strange Fire” conference was a representation of that? 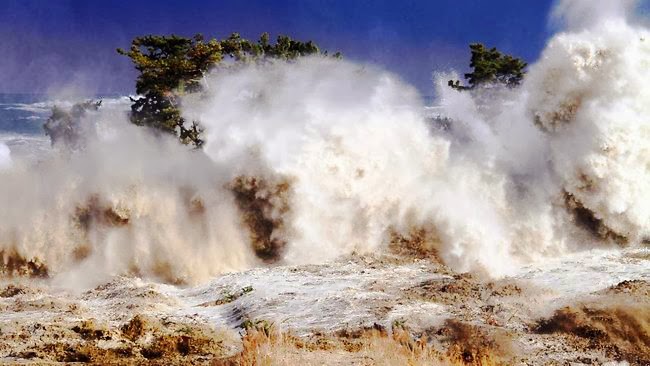 But there’s a third thing that (I believe) I’ve seen: this wave, this move of God, being so big, and being so different, will carry with it things that we’ve always considered heresy, wrong, unclean. (Tsunamis are very seldom sparkly clean.)

This is where I put the reports of God moving freely among gay churches: I know (I’ve seen it in visions) God is going to breathe life into the homosexual community, and I hear reliable reports that he has begun to do this already. But wait! Shouldn’t they repent? Yeah, but I didn’t repent of all of my sin until I understood it was sin, and some of that was decades after I was saved and filled with the Spirit. And I guarantee you that their repentance is not my responsibility!

This is also where I put the (equally credible) reports of the New Age movement coming to Christ. I know God is going to breathe life into the New Age community, and I hear reliable reports that this, too, has begun to already. But wait! Shouldn’t they repent? Yeah, but see above.

So how will homosexuals and New Agers fit into the next move of God? I don’t know. I expect that they’ll be involved, but let’s see what God does, shall we? And let’s welcome those He brings into his house!

Wow! God has been talking to my husband and I about this for years. My husband works for a company called "New Wave" Communications. I always to knew it was so prophetic for what the Father was calling us into as a apostolic ministry work. We have such a heart and love for the gays. transgenders, lesbians, etc. This article caused me to weep. Gods love is so profound sometimes its hard for our human minds to contain. You are so on point with this it is astounding to me. Thank you for speaking up in the face of the opposition you will receive. This will not be an easy thing to carry for those who God is calling to stand for His love for all people. Blessings to you.

I would like to know what prophet said homosexuals were going to be in the next wave of God even undelivered. It is not that God will not receive a homosexual, but Jesus said to the woman in adultery, Go and sin no more. Why does anyone think that He doesn't say the same thing to every homosexual? The problem is not with loving homosexuals into the kingdom of the Lord, the problem is thinking that once they are in they and we accept their sin. The whole point of our salvation is so that God by the Holy Spirit can transform us into the very likeness of Christ. The sin must go for Christ to be formed in us. This is the great misunderstanding of all that think God is fine with us being laden down with sins even after we have said we are going to follow Jesus. Dragging our sins along - no matter what sins they are - will keep us from becoming genuinely Christlike.

Donna, I'm glad you're here, but you've missed my point.

My point is NOT that homosexuals get to keep their sin any more than gluttons or bigots or the self righteous.

My point is that their sin is not my responsibility. Jesus declared, "I will build my church..." and I don't believe he's fallen down on the job.

It's not that I'm not involved, but I say again that their repentance is not my responsibility.

Glory to God! He who knows the hearts of men knows how to shed light to their understanding and bring them into all truth, enabling transformation of their hearts and spirits in preparing His Bride! I think the larger hurdle is preparing the body to release their healing cells to the arm God has attached that isn't fully formed! The timing is God's, never has been ours. I praise God for His grace and patience during the process and growth in my own life allowing me to believe and hope for His best in the lives of others! Halleluja!

so the KEY WORD in all of this is

it has not happened YET .... we are not there YET .... they have not seen the need to repent (change their mind) YET

I have x-n-laws that live and have lived this lifestyle. They lived through years and years of abuse. One of the girls in this family was so abused by a step dad that she could not have children. I love them all dearly !! And Father has used me in their lives. All HE wanted me to do was love them. So that is what I have always done. The subject of what was right or wrong according to the word of God was only spoken of when they brought it up. And it was always made known to them that they were loved by the Father. One of them has been born again, has now repented, and is sharing the gospel with the other siblings. Believe it or not I have watched the love and care that they have for each other, as well as for others, and been amazed ! We never know what a person has been through that may have caused them to be the way they are. But the Good News is that no matter what it was that caused it, or what they have done, Father loves them ! And HE wants to heal them and set them free !!

Being filled with the Spirit of God is possible for all truly born again people but it is not a sign that all is well with that person. In time, God's time, judgment will come on that very same person that was filled with the Spirit if he has not repented of what ever God is convicting him of. The Bible is full of those stories and Iv'e seen it over and over again in the church and with a member of my own family. The anointing will leave at an appointed time if God's Spirit is being vexed. The Bible also talks about levels of sin and some being more profound than others. This hole mess started because Christians started saying God hates gays. They should have kept their mouths shut. It caused gay people to try and prove they could remain in sexual sins and still be believers. Any person can be called to account for their lives at any time in the here and now.

Hmmmmmm, I agree I don't know either. And im ok with not knowing, I know that we are called to Love and not judge. And I know that I have no right to cast any stones when even though I have known and loved God for as long as I can remember I am far from living a sin free life. And although I repent and try again I still stumble on a daily basis. Does this mean I will miss out on the tsunami wave that's coming our way? I sincerely hope not, Im choosing to believe that Papa Gods grace, love and mercy is enough to cover me. Once he speaks to me personally about an issue and I then choose to ignore him, we'll that's another situation entirely. The world isn't the same as it was 20 years ago, the young generation are being raised in a society where the majority rule is political correctness wether I agree with it or not. Im going to go with " I don't know" and will let God be God, he knows the bigger picture and Im ok with that.

As far as I can tell we're still in the last days and Peter's first prophetic proclamation still goes..."God said...I will pour out my Spirit on ALL FLESH"... Clearly a done deal. But wait just a minute here - "the grace of God convicts God's children of sin" - What!? Grace convicts?! Unmerited favor enables us to walk in our righteousness - right?
He convicts the world of sin and they decide whether or not to metanoia. He leads us "His children" into ALL TRUTH and we decide whether or not to obey.
Could seem a little nit-picky but in either case the goodness of God is available to help us all - including the Homosexual .

That's awesome, I totally agree that God is on the move and wants to bring all those the Church deems 'undesirable' into the Kingdom. It was the undesirables in Jesus day that founded the early church... More people would come to know the Father heart of God if the church would stop trying to take responsibility for their sins. Love it!!!