Don't Look At The Waves

As soon as the meal was finished, [Jesus] insisted that the disciples get in the boat and go on ahead to the other side while he dismissed the people. With the crowd dispersed, he climbed the mountain so he could be by himself and pray. He stayed there alone, late into the night.

Meanwhile, the boat was far out to sea when the wind came up against them and they were battered by the waves. At about four o’clock in the morning, Jesus came toward them walking on the water. They were scared out of their wits. “A ghost!” they said, crying out in terror.

But Jesus was quick to comfort them. “Courage, it’s me. Don’t be afraid.”

Peter, suddenly bold, said, “Master, if it’s really you, call me to come to you on the water.”

Jumping out of the boat, Peter walked on the water to Jesus. But when he looked down at the waves churning beneath his feet, he lost his nerve and started to sink. He cried, “Master, save me!” 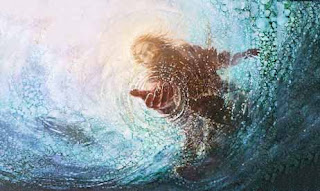 Jesus didn’t hesitate. He reached down and grabbed his hand. Then he said, “Faint-heart, what got into you?”

The two of them climbed into the boat, and the wind died down. The disciples in the boat, having watched the whole thing, worshiped Jesus, saying, “This is it! You are God’s Son for sure!”

----
That’s kind of the season we’re in, isn’t it? An awful lot of wind coming against us, battering us with waves of nasty stuff in the news. And us, trying to walk on the water to Jesus.

When we look at him, we’re in good shape. But when we look at the nasty stuff that the world is throwing at us, that the media is shouting at us, it’s easy to lose our nerve and to sink. We end up crying out for help.

But while that’s embarrassing (and we get incredibly soaked by the waves and scared) and uncomfortable, it’s not such a bad thing to get rescued by Jesus from sinking, I don’t suppose.