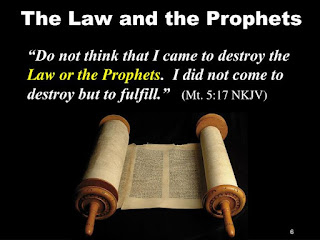 I’ve run into several people recently who quote Matthew 5:17, and use that to say that the OT Law is still valid.

“Do not think that I came to destroy the Law or the Prophets. I did not come to destroy but to fulfill.” [MT 5:17]

Others say, “No, Fulfilled means it’s done, it’s concluded. It did its job, and now it’s over.”

So I thought, Let’s see how that word is used in other places in the Bible. That should give us an idea of what it means here.

So here’s a list. This is just part of the New Testament list, but the Old Testament use of the word is similar. (See the links to the full list in the footnotes)

Mat 2:15
where he stayed until the death of Herod. And so was fulfilled what the Lord had said through the prophet: “Out of I called my son.”

Mat 2:17
Then what was said through the prophet Jeremiah was fulfilled:

Mat 2:23
and he went and lived in a town called . So was fulfilled what was said through the prophets, that he would be called a Nazarene.

Mat 13:35
So was fulfilled what was spoken through the prophet: “I will open my mouth in parables, I will utter things hidden since the creation of the world.”

Mat 26:54
But how then would the Scriptures be fulfilled that say it must happen in this way?”

Mat 26:56
But this has all taken place that the writings of the prophets might be fulfilled.” Then all the disciples deserted him and fled.

Mat 27:9
Then what was spoken by Jeremiah the prophet was fulfilled: “They took the thirty pieces of silver, the price set on him by the people of ,

Mar 13:4
“Tell us, when will these things happen? And what will be the sign that they are all about to be fulfilled?”

Mar 14:49
Every day I was with you, teaching in the temple courts, and you did not arrest me. But the Scriptures must be fulfilled.”

Luk 1:1
Many have undertaken to draw up an account of the things that have been fulfilled among us,

Luk 1:38
“I am the Lord's servant,” Mary answered. “May your word to me be fulfilled.” Then the angel left her.

Luk 4:21
He began by saying to them, “Today this scripture is fulfilled in your hearing.”

Luk 18:31
Jesus took the Twelve aside and told them, “We are going up to , and everything that is written by the prophets about the Son of Man will be fulfilled.

Luk 21:24
They will fall by the sword and will be taken as prisoners to all the nations. will be trampled on by the Gentiles until the times of the Gentiles are fulfilled.

Luk 22:37
It is written: ‘And he was numbered with the transgressors'; and I tell you that this must be fulfilled in me. Yes, what is written about me is reaching its fulfillment.”

Luk 24:44
He said to them, “This is what I told you while I was still with you: Everything must be fulfilled that is written about me in the Law of Moses, the Prophets and the Psalms.”

Jhn 17:12
While I was with them, I protected them and kept them safe by that name you gave me. None has been lost except the one doomed to destruction so that Scripture would be fulfilled.

Jhn 18:9
This happened so that the words he had spoken would be fulfilled: “I have not lost one of those you gave me.”

Jhn 19:24
“Let's not tear it,” they said to one another. “Let's decide by lot who will get it.” This happened that the scripture might be fulfilled that said, “They divided my clothes among them and cast lots for my garment.” So this is what the soldiers did.

Jhn 19:28
Later, knowing that everything had now been finished, and so that Scripture would be fulfilled, Jesus said, “I am thirsty.”

Jhn 19:36
These things happened so that the scripture would be fulfilled: “Not one of his bones will be broken,”

Act 1:16
and said, “Brothers and sisters, the Scripture had to be fulfilled in which the Holy Spirit spoke long ago through David concerning Judas, who served as guide for those who arrested Jesus.

Act 3:18
But this is how God fulfilled what he had foretold through all the prophets, saying that his Messiah would suffer.

Act 13:27
The people of and their rulers did not recognize Jesus, yet in condemning him they fulfilled the words of the prophets that are read every Sabbath.

Act 13:33
he has fulfilled for us, their children, by raising up Jesus. As it is written in the second Psalm: “ ‘You are my son; today I have become your father.'

Act 23:1
Paul looked straight at the Sanhedrin and said, “My brothers, I have fulfilled my duty to God in all good conscience to this day.”