The Vision of the Wooden Spoon

The vision began with a quiet stream, in a quiet, green meadow; it reminded me of Narnia for some reason: that peaceful. The stream was wider than one could jump across, and deeper than you’d want to wade across, and its flow was smooth and fairly fast. All in all, it was a very peaceful environment. The birds were singing. 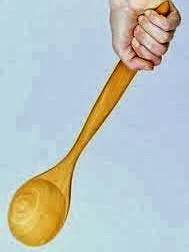 Then a giant hand appeared in the sky, holding a giant wooden spoon, the kind of spoon that people use in the kitchen to mix cookie dough. The spoon dipped into the stream and stirred.

For a while, nothing much happened, except the stream became more turbulent from the spoon’s motion. After a minute or two, the stream darkened, and soon I could see things in the muddy stream: old tires, boots, cans, bottles, sticks and stones, jars, bags of rubbish. The hand with the spoon withdrew into the heavens.

The hand with the spoon appeared again, and stirred the water again, and again the stream darkened with mud, again tires, discarded shoes, bottles, cans, and other detritus were stirred up, and again they floated various distances downstream.

The cycle was repeated several times, until eventually, the stirring from the almighty spoon did not bring up muck and garbage.

Now the stream was actually clean.

I believe that this is what Father is doing in some of our lives. He’s stirring things up in our lives, and it’s uncomfortable. It’s easy to be appalled or offended at what he’s doing, because he’s good at what he does. Things are being stirred up, memories, habits, relationships that have been in our lives are being stirred up from the dark depths of our lives, and brought into the light.

And the reality is that much of what he’s stirring up is garbage: shame, embarrassment, memories of foolishness, of sin, histories of unwise choices, character weaknesses. It’s easy to resent these coming to the surface after how many years of being hidden in history.

But he’s bringing them up in order to wash them away, in order to remedy the issues. Trust him. Have hope, rest in the confident assurance that he does know what he’s doing, and that he’s working for good in you, for the purity that we really have wanted. He’s answering our prayers.

This an amazing story. Exactly what is going on in my life and those I know. The Lord is so good and so beautiful! Thank you!


Hurrah, that's what I was looking for, what a stuff! present here at this web site, thanks admin of this site. amex online login