There Is No Hell Prepared For Sinners (Don't jump to conclusions here...)

Let me just come out there and say it: There is no hell that has been prepared for "sinners." Dante was wrong.

Now don't jump to conclusions. That doesn't mean that there isn't something hellish; there is. The Bible doesn't talk much about it, and I can understand: it's an ugly subject.

Jesus taught about "everlasting fire prepared for the devil and his angels." Maybe this is the "lake of fire" of Revelation 20. Sure sounds like it.

But did you see who it's prepared for? It's prepared for the devil and the rest of the angels that followed the angel named Lucifer when he was tossed on his ear out of Heaven.

It's a topic that the Bible never answers very clearly (for all that there are a lot of Bible thumpers that seem to have all the answers!), so I can't speak clearly about it except this: it isn't prepared for people.

I guess there are some people who are so completely committed to the things of demons (often called "sin"), that they refuse to be separated from them. I guess that when the devil and his angels are chucked into that "everlasting fire" that the people that refuse to let them go... well, ... they go with them. 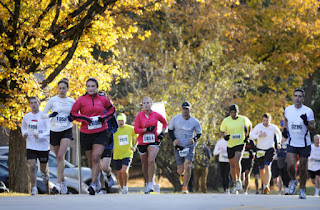 I’ve been frustrated at some people recently, but I think I may be doing the same thing that they’re doing. I hate it when that happens.

In the past couple of decades, God has awakened a bunch of stuff inside of me, and I’ve gone from being a “faithful churchgoer” and a “good Christian” to being a lover. I’m running this race with more passion and more determination and more energy than I have since I was first saved.

As a result, I’m further along in the race than I used to be, the race I refer to as “That I might know Him!” Some of the people I used to jog alongside are still jogging, and we don’t fellowship as much any more, because I’m running with pretty much everything I have, and they’re still jogging. I don’t mean this to sound prideful, but I’m running ahead of where they’re running, and we aren’t close enough in the race to treasure the same things any longer.

Recently, a friend got in my face. He’s running the race, and very recently, God has lit the fire in him that He has lit in me, so my friend is running as hard (at least) as I am now, but he’s starting from way back there, from among the joggers. Among the joggers, my friend is now leading the pack.

He read some of the things that I’m posting, describing some of the new treasures that Father has been unveiling as I’ve run hard these last couple of decades, and my friend, who is still running among the joggers, didn’t understand the treasures that I’ve recently found. So he got in my face, and frankly, he ripped me a new one. “I’ve never heard of these things! These new revelations can’t be from God! Nobody that I’m running with has ever heard of them.”

Frankly, it hurt. It hurt a lot. But “Praise be to the God and Father of our Lord Jesus Christ, the Father of compassion and the God of all comfort, who comforts us in all our troubles.” Father comforted me, and showed me the race we were running. And then he showed me the bigger picture.

My friend was making a mistake: he was running ahead of a pack of runners, ahead of everyone he used to be jogging with. That was a glorious thing, and Father is real proud of him. But my friend was only looking at the people that are following after him: he’s only looking behind him, and so he thinks that he’s running at the head of this race, leading everyone who is running in this race, able to speak and able to correct every runner in the race. He’s not looking ahead, not seeing the multitude of runners that are ahead of him, many of whom have been running hard for so long that they’re several turns ahead of him, out of his sight beyond him.

And so it’s hard for him to think of others running ahead of him, who might have revelation that he doesn’t have yet, but which he will have, if he keeps running as well as he is now. But when he encounters those other runners now – on Facebook or some other social venue – he thinks they’re running the wrong race, because they’re running a path he knows nothing about, and he thinks he has to correct us.

So I get hit with this fiery dart, and so I look back to see where the “attack” is coming from, and I see it’s coming from my friend running behind me, my friend who doesn’t yet understand the things that I’m discovering in God. I realize, it’s out of love – or at least out of concern for his friend – that he’s wounding me, that he’s slowing me from my own race, that he’s drawing my attention behind me.

And my attention is indeed behind me, helping some people catch up, dodging others who want to “fix” me, and remembering how I used to be a contented old jogger, back in the day, thankful that I’ve learned to run.

Part of me wants to slow down my pace, to drop back in the race to where I can run side-by-side with my friend. But Father reminds me that this can’t be a solution: there will always be someone slower than me, maybe someone who’s dropped out of the race altogether, who’s offended by the fact that others are making progress and he is not: someone will always be offended at those who are running the race. It’s death to stop running, and Someone else has already died for them, Someone else is encouraging them to run their own race, and He’s a capable coach: I can trust my friends to Him.

Father then gently pointed out that I’m doing the same thing. I’m looking behind me, at the people I’ve passed, at the people catching up. I’ve taken my eyes off the prize. I had started to measure my progress by those behind me. That’s a mistake!

He reminds me of the rules for this race: “And let us run with perseverance the race marked out for us, fixing our eyes on Jesus, the pioneer and perfecter of faith. Consider him who endured such opposition from sinners, so that you will not grow weary and lose heart.”

Looking forward, I’m startled to discover we are in fact surrounded by such a great cloud of witnesses! Oh my! I’d lost track of them.

I’ve been visiting with some Remarkably Intelligent People recently (I didn’t know IQ scores went that high! Scary!) I’ve observed that a number of them have real difficulty being Christians and relating to the God of the Bible. (Not all, just a large fraction.)

Because of the merciful nature of God, and of his people (when we do it right), Christianity does understandably draw a lot of broken people who find mercy or acceptance (hopefully both) that they may have had difficulty finding elsewhere. The reality is that broken people make broken choices, sometimes justify those broken choices, and sometimes their understanding of God is characterized by those bad choices. For example, if I were to condemn you for not living up to my own moral standard, and then declaim that this is the way God is, a Remarkably Intelligent Person is probably intelligent enough not to be drawn to a god characterized by moralistic bigotry.

But in addition, in many of the Hallowed Halls of the Faith, thinking is not only not encouraged, it is occasionally actively discouraged, even (foolishly) presented as a conflict to faith. “Evolution can’t be true, because the Bible says God created everything” not only misses the point of the conversation, it demonstrates that people who think are not welcome to that conversation.

And then there’s the issue that Christians very often speak gibberish. In our more lucid moments, we sometimes call it “Christianese,” but it's gibberish. We make noises that nobody else uses, and expect other people to know what our strange vocalizations mean. Very often, we’ll abbreviate a whole conversation into just a conclusion, bypassing the fact that it took someone (hopefully ourselves) months to arrive there. For people with very healthy minds, the process is the point of the conversation: they’re not interested in taking our word for something we figured out months ago.

For example, I’ve been known to say, “God said it; I believe it; that settles it,” as a reminder of the precious conclusion I arrived at from a very long, very personal evaluation of what I understood about the scriptures. That declaration is meaningful to me, but not to the Remarkably Intelligent Person who hasn’t been through my year-long analysis. But if I just quote it, merely because someone I respect said it and I think it gives credibility to my argument: please just don’t go there. That’s insulting to intelligence in general.

Finally, all of the Remarkably Intelligent People I know – whether they are Christians or not – know what the Bible says. Generally they know the Book better than I, even the unbelieving Remarkably Intelligent People, and I’ve been studying it for 40 years! One of the characteristics of remarkable intelligence is the ability to see the remarkable difference between what the Bible declares Christians should be like (Jesus set up this booby-trap in John 17:23), or the incongruity between the vengeful God preached from the OT and the God of Love as he reveals himself in the NT. The fact that most of God’s people can’t reconcile either mismatch is also not overlooked.

What I AM suggesting is nothing new: let’s not be stupid. Let’s see if we can speak English (or another actual language) instead of religious gibberish. Let’s take the time to figure out what we actually believe, and more importantly for our own growth: why we believe it.

COMMENT: These are politically incorrect musings. I've just been trying to examine a tough topic honestly. If you're offended: please get over it; this isn't about you.
1 comment: