Have you ever been surprised by what a verse you’ve always known means more when you see it in the light of another verse. 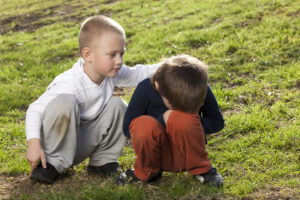 Today when I read this verse, I heard it in the context of 1Corinthians 14:5: “But he who prophesies speaks edification and exhortation and comfort to men.”

There it is again: comfort each other, edify each other. And here, Paul describes this as the purpose of the prophetic gifts.

Two verses earlier, he commanded us, “Pursue love, and desire spiritual gifts, but especially that you may prophesy.” Again a command, this time to pursue prophetic gifts. One translation says, “covet to prophesy.”

Wait, what? You don’t mean to say that every one of us can prophesy, do you? That I can prophesy?

Yeah, I do. [cf 1Co 14:31] You can prophesy. You can comfort folks, edify [instruct or improve] them, exhort [encourage] them. In fact, that’s both part of your destiny and part of your instructions from God. 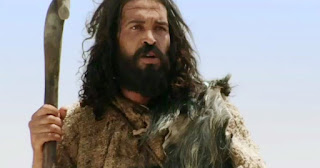 According to Jesus, John had a pretty solid ministry. The incarnate Son of God said this about him:

“But what did you go out to see? A prophet? Yes, I say to you, and more than a prophet. “This is he of whom it is written: ‘Behold, I send My messenger before Your face, Who will prepare Your way before You.’ “For I say to you, among those born of women there is not a greater prophet than John the Baptist.”  [Luke 7]

It seems to me that if the Son of God describes you as the greatest prophet in the history of the world, that’s probably a ministry you can trust. But Jesus went further, calling him Elijah.

“For all the Prophets and the Law prophesied until John. And if you are willing to accept it, he is the Elijah who was to come.” [Matthew 11]

Jesus was identifying John as the fulfillment of Malachi 4: “Behold, I will send you Elijah the prophet
Before the coming of the great and dreadful day of the LORD,” the prophet that the entire nation was waiting for.

This John the Baptist from Jesus’ point of view. Looking at his life from his own perspective, we see a different picture:

“Now this is the testimony of John, when the Jews sent priests and Levites from to ask him, “Who are you?” He confessed, and did not deny, but confessed, “I am not the Christ.” And they asked him, “What then? Are you Elijah?” He said, “I am not.” “Are you the Prophet?” And he answered, “No.”

“Then they said to him, “What do you say about yourself?” He said: “I am ‘The voice of one crying in the wilderness: “Make straight the way of the LORD,” ‘ as the prophet Isaiah said.”

And they asked him, saying, “Why then do you baptize if you are not the Christ, nor Elijah, nor the Prophet?” John answered them, saying, “I baptize with water, but there stands One among you whom you do not know. “It is He who, coming after me, is preferred before me, whose sandal strap I am not worthy to loose.”  [John 1]

A lot of people did not understand John the Baptist, and John himself was one of them.

In fact, John even questioned whether he had utterly failed at the part of his ministry he did understand, at one point sending his disciples to ask Jesus, “Are You the Coming One, or do we look for another?” [Luke 7:19]

This is the man that the Messiah, the Incarnate Son of God described as, “Among those born of women there is not a greater prophet than John the Baptist.”

I was reflecting on these statements about John recently, and I realized, “If John can miss it that badly, so can we. If John only figured out part of what he was doing, and wasn’t even sure about that, then how often, I wonder, do we misunderstand the impact that we’re having on the world, on the lives around us. Do we miss the big picture?”

The reality is that we won’t really understand – we cannot understand – our effectiveness in our life in this life here on earth, not until we see it from God’s perspective. I refer to that day as Big Screen Day, when we’ll actually see the results of our life’s work, and we’ll meet the people whose lives we have impacted.

Until then, we “see through a glass darkly,” and we lack the whole picture. My recommendation is that we don’t waste our time wondering about the efficacy of our ministry. He’s instructed us to “fix our eyes on Jesus, the pioneer and perfecter of faith.”