You know how some things are better when they’re together? There’s more goodness when the right things come together. Cookies & milk are like that. Red wine & good cheese. Garlic & onion.

I always enjoy finding new combinations of things that belong together, that I had never considered together before. Sometimes that happens to me with Scripture. This is called letting Scripture interpret Scripture, and it’s known to be a good way to interpret the Bible.

When two or three passages are put together, sometimes they mean more than they did when they were apart. And since “all Scripture is God breathed, and is profitable for teaching, for reproof, for correction, for instruction in righteousness,” we can be confident that it’s a legitimate use of the Bible to use all of it for teaching or correcting our understanding of God. 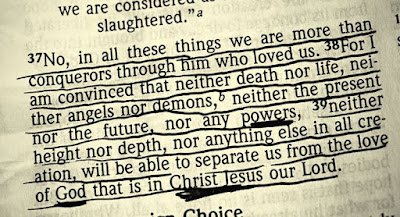 For example, consider Romans 8:38-39: “For I am convinced that neither death nor life, neither angels nor demons, neither the present nor the future, nor any powers, neither height nor depth, nor anything else in all creation, will be able to separate us from the love of God that is in Christ Jesus our Lord.”

That’s kind of a big statement. It’s basically just a big list of stuff that cannot separate us from the love of God. There’s a lot of comfort in those verses.

Recently, two of the items on the list stood out to me: the first one (“death”) and the last one (“nor anything else in all creation”) also cannot separate us from the love of God. That’s a big deal.

And as I was reflecting on how we can’t be separated from God’s love by death or nothing else, another verse drifted through my mind. (It had my Father’s fingerprints on it.)

“But the cowardly, the unbelieving, the vile, the murderers, the sexually immoral, those who practice magic arts, the idolaters and all liars—they will be consigned to the fiery lake of burning sulfur. This is the second death.” [Revelation 21:8] 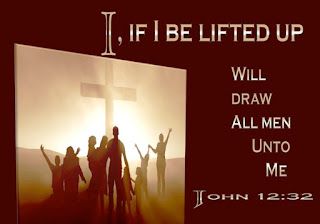 It also does not say, “I might draw” all people to himself. It says, “I will draw,” and we studied that word to discover it was indeed a forceful drawing, like drawing a sword, or drawing a bow, or drawing a boat up onto the shore. “All” is a big word.

We can certainly argue that the promise of Romans might be only for believers; I know because I’ve done it, trying to make God exclusive. But God isn’t terribly exclusive (though his people certainly are), which makes that application difficult. Possible, but difficult.

And we can certainly argue that the warning of Revelation only apply to unbelievers; I used to teach that too, though if I’m honest, I know believers who fit every one of those qualifiers for the fiery lake, which kind of messes up that argument.

But John’s verse, now that little word “all” throws a pretty epic wrench in that whole “us vs. them” thinking.

That’s an unnerving conclusion. At this point, I cannot set this down as “What I Believe.” I can’t say that I’m confident this conclusion is an accurate representation of God (though I’m pretty confident that my previous beliefs were drivel and malarkey, only suitable for fertilizing the tomatoes).

All I’m saying is that if the whole Bible is true (and it is), if all scripture is God breathed (and it is), then I need to consider this carefully, seriously, in the light of the “whole counsel of God,” [Acts 20:27] and also in light of “the exact representation of [God’s] nature” [Hebrews 1:3].

My tentative conclusion is that God is not nearly so interested in smiting as we’ve tended to think he was. No, let me say it another way: God sure appears to be way more committed to the people he loves, and I think that might be everybody.

I think I’ve believed too little of him. 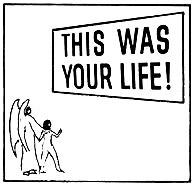