A Closer Look at Clearing the Temple

Jesus cleaned out the temple twice, once at the beginning of his ministry, and once at the end.

A lot of folks read the story about Jesus chasing the cattle and sheep out of the temple, of Jesus overturning the tables of the business-people there, and they infer that Jesus was angry, that he was displaying a holy wrath.

That is not Bible interpretation. That’s abusing the Bible to justify your own prejudices and misunderstandings of who God really is.

So what does the Bible actually say?

The first time, in John 2, it says that Jesus saw what was going on in the temple, and then stopped to weave a whip out of cords (literally, out of cords made from rushes, from plants like grass). Some observations:

• It takes a fair bit of time to make a whip, and it takes even longer to make one out of *small* cords. This was not a rash action, not an act of rage or passion. This was carefully thought out.

• The sort of whip you make from rushes or small cords is not a weapon. It’s a flimsy thing, only useful for driving livestock. This is not Indiana Jones’ favorite weapon; it’s more like a sisal rope. It will get the animal’s attention, but no more.

• The record is very clear: Jesus used even that wimpy whip only on the cattle and sheep. He reacted to the people differently, and unpleasantly for them, but Jesus did not go after people with even a wimpy whip.

The second event (Matthew 21, Mark 11, and Luke 19) is different. Jesus came into the temple during his “Triumphal Entry” on Palm Sunday. So he saw the shopping mall that they were setting up that day. 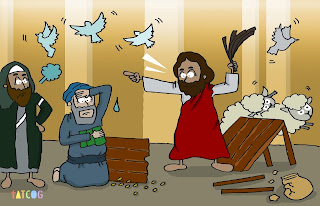 This was not a rash action either. He went back to his AirBNB outside town, and took no action whatsoever until the next day. He certainly had time to think through his choices. And knowing how Jesus did things, I’ll bet he talked it over with Father before he did anything. After all, this is the guy who said, he “can do only what he sees his Father doing” [John 5:19]. So apparently, cleaning out the temple was something he saw his Father doing.

Conclusion: the actual facts of what the Bible says about these events, absolutely do not support the idea of Jesus flying off the handle, Jesus in a rage, Jesus having a temper tantrum. Jesus was not out of control.

Yes, he did clean the place out. Yes, he did make a big old mess. Yes, he interrupted business in a very big way.

But there is no record of him ever hurting anyone, either human or animal. This was not an emotional reaction of any sort: in both cases, the record is very clear that he took his time before responding.

Summary: there are lot of folks who have a vested interest in the idea of an angry God. Some of them have leathery wings. But the New Testament doesn’t actually support that silly idea nearly as much as they shout and fuss.

Don’t believe their shouting and fussing.
No comments:

I’m going to speak about things that I have no training in. I have opinions, based on experience. I’ve not put this into words for a long time, so this may get overly-detailed (that’s how my process works).

Comment: I’ll be speaking as a guy (I generally do, but this time it may make a difference). 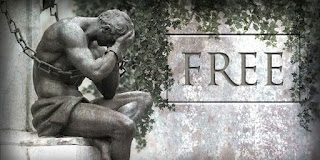 Warning: This isn't complete. Not sure it's actually possible to be complete on this topic. This is more of an outline, notes, rough thoughts.

Personal opinion: solving symptoms is never a substitute for solving the core issue. If one symptom is solved, but the core issue is not, then the core issue will build pressure, and pop out in another place, or (more likely?) blow the scab off the same symptom.

Personal observation: when “church folk” respond to any addiction, their response is generally in the realm of “self control.” This does help a small number of people.

Personal opinion: the core issue is identity, specifically intimacy in relationship. Intimacy, in this context, is NOT a euphemism for sex: it’s about being known and accepted fully, and about knowing and accepting fully. And the first place for this intimacy is with God:

Personal opinion: This inherently creates a problem: the only solution is to know and receive the actions/choices of someone else. Fundamentally, no man can solve this problem on their own, by their own strength. There’s room for a sermon there, but this is not the time for that sermon.

Personal Opinion: the only thing that a man can do to facilitate others’ meeting of these needs is to initiate that sort of relationship. With God, that’s only about making one’s self as open as possible before God, and that is a scary process. With a bride that’s a terrifying thing, because it’s the same kind of vulnerability, but vulnerability before a fallible human being who has her own needs. Scary. But that’s all he can do to help her offer that to him: offer it to her, both for her well-being, and by way of being an example.

Is it scary? Hell yes!

Are we guaranteed a life of ease and no problems? You’re kidding, right?

But is it possible? abso-freakin-lutely.

And yeah, it really is the better deal! Oh my goodness, yes! 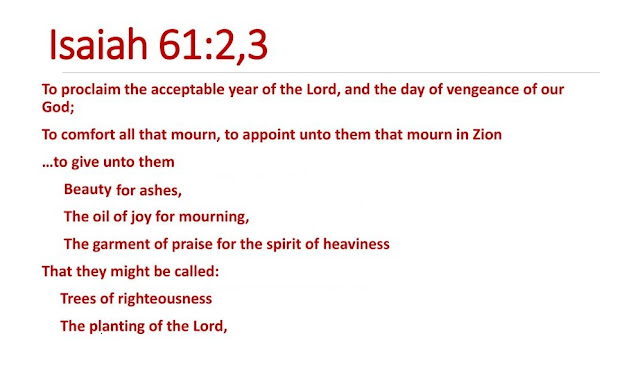