Are We Preoccupied With Warfare?

Some believers don’t like to talk about spiritual warfare. Recently, someone said to me, “There is not much of a battle when I flip the light switch on. Darkness is not presence, it is merely the absence of light. Is it me or is the religious earthly kingdom preoccupied with war?”

And honestly, he has an excellent point. And it is completely true so long as we're speaking in the theoretical realm, so long as everyone and everything submits to the rules.

But not everybody does. In reality, the Book talks about things that do not (yet) bow their knee to the authority of the Light. There are some beings, therefore, who do not yet yield to that supreme authority. Some of them are people. That, of course, means that some of them are not people.

Think with me for a minute: if Jesus, who is God incarnate, who is the Light incarnate, had to deal with intense enough warfare during his temptation that it required angels to come & minister to him, then it is likely that we-who-are-less-than-He may also encounter demonic opposition.

If Jesus had to regularly spend all night in prayer, and at least one time he sweat blood in prayer, then you and I also probably need to invest in substantial prayer in order to accomplish the purposes of the Kingdom in our area of influence on this planet.

The Bible uses warfare vocabulary to describe this process, so I will as well. In fact, Paul declares that “we are not ignorant of [Satan’s] devices” (2 Corinthians 2:11). This is not a place where “ignorance is bliss.”

Paul’s apostolic counterpart, Peter, exhorts us, “Be sober, be vigilant; because your adversary the devil walks about like a roaring lion, seeking whom he may devour” (1 Peter 5:8). Someone seeks to devour me and mine? That’s not fair! (No, it’s not fair, but then, nobody promised that the devil who is a “lawbreaker” would always play fair! Sorry to burst your bubble.)

In the process of dispelling our un-blissful ignorance, Paul explains, “we do not wrestle against flesh and blood, but against principalities, against powers, against the rulers of the darkness of this age, against spiritual hosts of wickedness in the heavenly places" (Ephesians 6:12).

In another place, he explains the war in more detail: “For though we walk in the flesh, we do not war according to the flesh. For the weapons of our warfare [are] not carnal but mighty in God for pulling down strongholds, casting down arguments and every high thing that exalts itself against the knowledge of God, bringing every thought into captivity to the obedience of Christ” (2 Corinthians 10).

Yeah, we’re involved in a war. In fact, we were born behind enemy lines, separated by a merciless enemy from the which is our heritage, which is where our Father is seated. It is God’s clear plan that we engage the war, and that we overcome the demonic enemies that are arrayed against us. And he has provisioned us for unquestionable victory.

I have learned that there is a word that accurately describes those who will not carefully and intentionally give attention to this warfare. It is "casualties."

Let us not be casualties, please.

What Does “More of him, less of me!" Really Mean?

John the Baptist once said of Jesus, “He must increase and I must decrease,” and forever after, religious Christians have murmured the same thing in holy tones, thinking that it was humility. Or we say it, “More of him, less of me.”

Frankly, the phrase is used not infrequently in the sense of, “Look at me. Aren’t I humble?” (Really, us decreasing wouldn’t even be part of our conversation if we were thinking of Him aright, because our focus wouldn’t be on ourselves.)

But we miss a couple more key points here.

First, most of the time, we seem to miss the detail that Jesus, the creator God, once had far less of you than he has now. In fact, he had none of you, and he didn’t like it. So he made you. And then [and *only* then] he said, “It is very good.”

So when we declare “He must increase and I must decrease,” we’re really saying, “God screwed up when he made me.” If that’s been your thinking, I invite you to repent, to choose a new way of thinking. All the evidence suggests that what God really wants is “More of him *and* more of you.” He’s made it pretty clear that he’s not doing this creation and redemption for his own health: it’s so he can have more of you (and me!).

What father, what parent, wanted their children to decrease so that they could increase? That isn’t actually a healthy model. Our Father is not trying to push us into obscurity so that he can have center stage all to himself.

This is never a statement of humility, even if we mean it that way. More than anything, it’s an inadvertent confession that we don’t really understand the gigantic heart of the King of the Kingdom.

Suggestion: Let’s stop trying to avoid the good things that God has called us into. Let’s quit hiding from our true calling as sons & daughters, as heirs of the Kingdom. 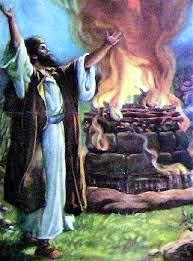 The gospel which we preach nowadays, which I refer to as “the gospel of salvation,” is largely about leading people to a salvation experience, typically in the form of “the sinner’s prayer.”

But such an experience is entirely lacking from the ministry of Jesus. Certainly, there’s nothing even remotely like a “repeat after me” prayer in scripture, but more, Jesus never called on people to perform any sort of act of conversion: no sinner’s prayer, no pledge card, no “with every eye closed, raise your hand.” Nothing. Nada.

So apparently, instead of a sinner’s prayer, the transition from sinner to saint was changing how you thought about God’s kingship, re-working your worldview and your view of Heaven. And that was between you & God; no public declaration, embarrassing or otherwise.

And since He demonstrated it, regardless of what we think of His teachings, we have to admit that “the Kingdom” the way Jesus sees it includes healing the sick and raising the dead. We watch Him in the Gospels, and it *looks* like it involves hanging out with tax collectors and “sinners” more intentionally than going to “church” (in his case, Temple).

And apparently, judging from the way he announced it, it involves thinking differently. And since he was talking to arguably the most religious people in history, apparently it meant “think differently than your religion has taught you.”

Adding His teachings into the description, the “good news” [“gospel”] of the Kingdom appears to also include loving people outside our comfort zone, and replicating ourselves (“bearing fruit”), and being treasured by God (as in the Pearl of Great Price).

It may be of some benefit to just look at every place that the Kingdom is mentioned in the gospels (start here: http://bit.ly/KingdomGospels), and see what the Holy Spirit shows you. But take your time; there are 119 verses in that link, each with some revelation on the Kingdom.

I very much encourage you to discuss what you learn with Holy Spirit, and let Him separate the meat from the bones!