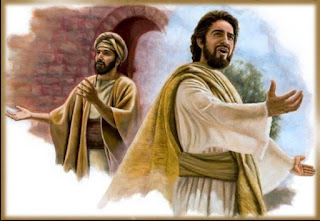 And this is where Hananiah and Jeremiah 28 come in; I recommend you read it again now. Please. God had declared one thing (70 years under Nebuchadnezzar’s yoke), and Hananiah declared something completely contrary (only 2 years in captivity). Some thoughts:
1. As a prophet, Hananiah was aware that he was directly contradicting ’s word; he broke ’s wooden yoke. It was a prophetic challenge, and he knew it.
2. The scriptures don’t identify Hananiah’s prophetic mantle any differently than ’s: he was not a “false prophet.”
3. Hananiah was certainly declaring something far more comfortable than that which the true word of the Lord had declared. If I were going into captivity, I would prefer 2 years to seventy. And certainly it’s easy to understand why someone would want to be seen as a prophet who stood up to the judgment that was facing them.
4. God (through ) declares he has not sent Hananiah with this message, and that the message he is speaking consists of lies, and that he was teaching the people “rebellion against the Lord.” Surely a prophet and the son of a prophet would know that he was not sent by God.
In verse 11, Hananiah prophesies the breaking of Nebuchadnezzar’s yoke, and he does it from his own will, contrary to God’s will. Yet in verses 13 & 14, God tells that things are different now because of Hananiah’s word. In other words, even though Hananiah was prophesying “lies”, even though his declarations were self-motivated, they had effect.
God backs up Hananiah’s prophetic word, even though it was in error. But it wasn’t a stamp of approval of his ministry. It cost Hananiah his life:
“Hear now, Hananiah, the LORD has not sent you, but you make this people trust in a lie. 16 Therefore thus says the LORD: ‘Behold, I will cast you from the face of the earth. This year you shall die, because you have taught rebellion against the LORD.’”(Jeremiah 28:15&16)
Now, this is Old Testament, but it seems that God honored the rebellious prophet’s word, knowing that it was a rebellious word, but he mitigated the effects of that word in two ways:
1. He removed the prophet from the scene. Hananiah actually died 2 months later.
2. He does an end around to accomplish His purposes in spite of Hananiah’s fulfilled word: “You have broken the yokes of wood, but you have made in their place yokes of iron.” (v13,14)
Hananiah’s word intended to reduce the yoke that had prophesied (from 70 years to 2 years), but instead, it increased the severity of the yoke (from a relatively comfortable wooden yoke to an immovable iron one).
The lesson in this: as a prophetic people created in the Creator’s image, our words have power, even in rebellion. But we must guard our words so that we speak what we really want to see created. Yes, God will mitigate the effects of our unwise words, but who among us wants to find himself opposed by the Almighty?
Let’s guard our hearts and our words. Obviously we must run from Hananiah’s example of defying the word of the Lord for his own good. But if we are to be judged for every idle word (and we are), then we must guard our casual speech as well.
We will be a prophetic people if we follow in the footsteps of our Father. Let’s speak “comfort edification and encouragement,” as far as possible, but whatever we speak, let it be His words, not ours.