There’s a principle that we all deal with. When we discover new evidence about something that we already have an opinion about, we are required to re-evaluate our opinion. If the new evidence contradicts what we believed before, then we probably need to change our previous opinion.

It happens in movies: Throughout the movie, you’re led to believe a particular opinion about one of the characters (perhaps “the butler did it!”), but at the end of the movie, new evidence is revealed, or old evidence is shown in new light. All of a sudden, everything changes. My favorite for this was The Sting. When they got up off the floor, it floored me! I realized that I had seen things wrong, interpreted things wrong. And suddenly, I understood previous bits of the movie in a whole new light! Suddenly I understood the characters completely differently.

I saw Philadelphia Story recently. Throughout the movie, Clark Gable’s character looked like a troublemaker, but in the denouement at the end, it’s revealed that he did it all out of love. Suddenly, I understood Mr. C.K. Dexter Haven completely differently! 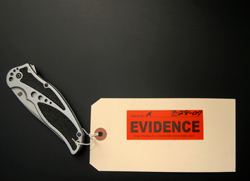 It happens in TV shows: Well, it did when I watched TV, anyway. In the old courtroom series Ironsides, Raymond Burr’s character did that every week. Barretta, a slightly less antique show, did the same thing. I imagine that many crime shows use this pattern regularly.

It happens in real life: We interpret the news one way, but then something happens that reveals that maybe things aren’t the way the media spun it the first time.

It happened in the Bible: Throughout the Old Testament, we were shown evidence that suggests certain things about the nature of who God is: what His character is like, what moves Him, what’s important to Him. But the New Testament is all about the denouement: Jesus himself is the new evidence, and it reveals a whole lot more about God, and reveals Him more clearly than we’ve ever seen before. And suddenly, I understand previous bits of the story in a whole new light. Suddenly, I understand God so differently, so much better.

For example, throughout the Old Testament, God seems far off and aloof, not really interested in hanging around the human race; after all, He keeps sending prophets to lead them instead of coming Himself. But in the New Testament, we see God in human form walking the streets of a subjugated city in order to be among humankind. Maybe He’s not really far off and aloof! Maybe that’s not a good picture of Him.

The stories of the Old Testament, the way that they were told and re-told and translated, and interpreted through countless pulpits, suggested that God rather enjoyed smiting people; a lot of smiting sure went on in those stories, and sometimes they’re described as God’s actions, and other times, the perpetrator isn’t really identified, but everybody “knows” that God did it, because “that’s what God is like.” (Compare 2 Samuel 24:1 with 1 Chronicles 21:1 for one example.)

But in the New Testament, Jesus, the “God in human form,” the “exact representation of the Father,” who “always does what the Father is doing,” never smites a single person, not even once. And it’s certainly not like he doesn’t have the chance! Rather, he reveals a God who not only turns the other cheek, but lets himself be murdered rather than smite a few deserving Pharisees. The God that Jesus reveals is not a smiter, isn’t eager to judge, always brings healing and life abundantly, and never brings death or destruction. We had understood him wrong before, but now, we have new evidence.

We know better now, or at least we should. We have been given better evidence, been adopted into a better covenant. The evidence we have now, in the person of Jesus, and in our own relationship with God, tells us that the wrathful, judgmental, distant smiting God of the Old Testament is not a true picture of who God is. We have better evidence than that now: if we don’t believe it, then it’s our own fault that we’re deceived.

Well said! Enjoyed it very much.