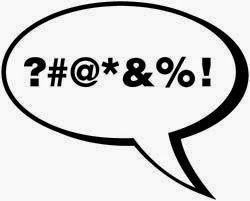 I find myself drawn to these conclusions: Four letter vocabulary is not my language, but I’m not going to condemn myself over my language choices when I hit my thumb with a hammer. And my offense at others’ use of a language that is not my own appears to be far more offensive to God than either their language or mine.

this was an excellent blog ... I had a lady sit across from me once and tell me "I" had to clean up my mouth before God was going to be able to use me properly....

I have gone through some horrendous abusive experiences in my life and family and sometimes, venting in profanity was the only way to eleviate the deep seeded pain that built up trying to 'perform perfectly' to fit in to religious systems of operations...

While my mouth is significantly 'cleaned up' I still find that sometimes the only words to express things are the 'more colorful words' and I no longer get 'religious' about them nor allow others opinions put me in shame/guilt about it...

All things ARE permissible but not all things are profitable...

I can be at peace within myself knowing regardless of how I vocally express things or what words I use, I am still accepted and loved and forgiven ...