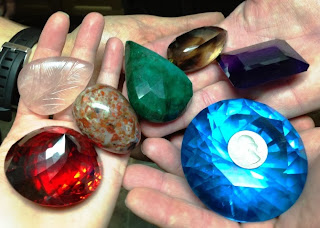 I was in a meeting a while back where I found 2 of 3 gems .. the two I found appeared right before my eyes.. I was looking and then blinked and looked and there were those two gems with a few others....

another one was given to me by someone walking by me as I sat on the steps and it was sitting right next to me....

Whether gems appear or not doesn't effect my salvation one way or the other... I am saved because I believe in Jesus and He is God's only begotten Son and He died for ALL my sins ....

I accept what He did for me and have entered into covenant with him almost 39 years ago.... finding gemstones was like icing on an already yummy cake ....

I know the devil didn't throw these gems ... and I know no human threw these gems.... and I am grateful to my Papa for blessing me with these 'trinkets' from another dimension parallel to this one ....

I give YOU Glory Jesus ... and I do not in any way elevate anyone else to this place of worship and praise...

God is able to do exceeding abundantly above ALL we can ask, think, or believe ... HE IS GOD.. I am a 'son of God' and highly cherished and beloved!

Thank you so much for clearing this up! I was thinking that all the gem stones were faked and was so disapointed that people had done that. Love that our bridegroom is doing so many varied awesome miracles!

Lived at a ranch for four years and found some in the rug right before me. At this ranch, would love to post a pic, but they are around the ranch, in the house. Mostly rose quartz and not sure what the others are. Glad you post this now I am blessed as I showed them to family and friends at Christmas and their response was "oh they are too polished someone put them out there." Well sometimes like you said that it is hard to Praise God for His blessings when it is supernatural like that. But a few years ago I asked God for them as I had seen someone have gold dust in their hand. Hello is He can part a sea, raise the dead, create the whole world, animals and us he can't place some gemstones on the floor or ground. amen to that hugs