Avoid Evil, not the Appearance of Evil

The Bible doesn’t actually tell us to avoid every appearance of evil.

First Thessalonians 5:22 says to avoid evil, not the stuff that looks like it might be evil. We avoid the evil itself.

Yeah, the translation from 400 years ago (King James) mis-translates yet another passage. The language today is different than it was in 1611; the words mean different things nowadays. (This is why I cannot trust any teaching that relies on the KJV to support it.) This is one place where that change makes a difference.

And that’s how EVERY other major English translation of the Bible presents this: “Reject every kind of evil,” (NIV) or “Abstain from every form of evil” (NKJV and NASB). Even the King James usually translates this word “shape.” “Avoid every shape of evil.”

He wasn’t afraid to have a rich hooker spend thousands of dollars worth of perfume that she massaged into his bare feet, wiping them with her prostitute hair and kissing him all over his feet. When she was done, he smelled very much  like a hooker, and he defended her actions!

Jesus avoided evil. He never sinned. But he spent so much of his time with the sinners that offended the “good Christians” of the day, that his reputation was “The Son of Man has come eating and drinking, and you say, ‘Behold, a gluttonous man and a drunkard, a friend of tax collectors and sinners!’” Jesus had a reputation as a party-goer. 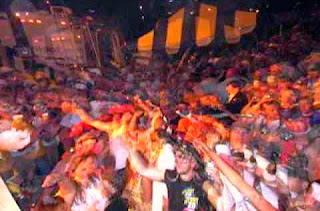 The reputation that Jesus had was that he was the favorite guy of the people who were stuck in sin.

That’s our call: to bring life to those people. These are the people who need what we’re carrying!

Our call is NOT to avoid the appearance of evil and hang around with the good people. Church kids surely don’t need the grace that we’re carrying quite so much as the untouchable people who are caught in their sin.