Another Look at the Forsaking of Jesus

I grew up in a church that sang hymns. Lots of hymns. Old hymns. A big, red hymnbook full of hymns, each with a hymn number.

Did you know that many hymns, particularly the old hymns, often didn’t have titles. I don’t know if song titles hadn’t been invented yet, or if they didn’t want to waste the space, or what. That’s why we use hymn numbers, because often there was no name to use. In that old red hymnbook, Hymn 100 was “Joy to the World, the Lord has Come.”

There’s a hymnbook that’s even older than the old red ones I grew up with. The Book of Psalms was the hymnbook of the Jews before Christ, as well as that of the early church.

Have you ever noticed that those psalms, like many hymns, don’t have titles. We generally refer to them by number (like we do with hymns). But the chapter numbers and verse numbers weren’t added until the middle ages (by Steven Langton, in the 12th century if you’re interested). Before that, there were no numbers associated with the psalms.

So before that, they used the first line as the title. People referred to that psalm which we now call “The Twenty Third Psalm” as “The Lord is My Shepherd.” It worked well, because that’s how everybody did it back then.

In fact, it functioned as kind of a shorthand as well. When someone spoke of “The Lord is My Shepherd,” others of their culture knew that was a reference to God’s faithfulness in trying circumstances. (Read Psalm 23 again: that’s what it’s about.)

Star Trek followers may remember “Darmok.” This memorable episode was about a race that spoke only by this sort of reference. In that context, the phrase, “Darmok and Jelad at Tanagra,” clearly spoke of cooperation, while “Sokath, his eyes uncovered” was an obvious reference to understanding or revelation.

The Psalms worked that way. Quoting the first line referenced the entire psalm, and brought the message of that psalm into people’s mind.

Another example: We talk about Psalm 22 only as the twenty-second song in a very long list of songs. But the Hebrew people knew that this psalm spoke about the Messiah, in more detail than many other passages.

Verse 8, for example, predicts his mocking: “He trusts in the LORD,” they say, “let the LORD rescue him. Let him deliver him, since he delights in him.” (See Matthew 27:43.) Or consider verse 18, which says that “They divide my clothes among them and cast lots for my garment.” (Compare that to John 19:24.)

When someone referenced Psalm 22, Hebrew listeners knew that they were talking about the suffering of the Messiah.

But they never called it Psalm 22, because the numbers hadn’t been added yet. They referenced it by quoting the first line: “My God, my God, why have you forsaken me?” 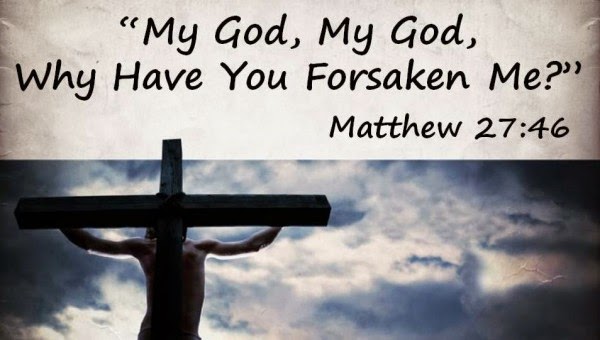 When we hear Jesus quoting Psalm 22:1, we scratch our heads and wonder why Jesus was accusing God of abandoning him. But that question didn’t occur to someone who grew up with the Psalms, especially the Pharisees and Sadducees. To them, Jesus was clearly referencing Psalm 22. Jesus was reminding the people listening of the Messiah who suffers.

When Jesus quoted this verse, he was saying, “Guys, what you’re witnessing is the Messiah suffering. I am that Messiah, and you need to recognize it.”

Jesus wasn’t accusing God. He was announcing, finally, now at the end of his life, that yes, he was God’s Messiah. Messiah has come. Messiah has been killed. Now what are you going to do about it?

I was already vaguely aware that Jesus was quoting Psalm 22 - that when he said that line it was like us saying "Mary had a little lamb" - everyone knows the next line.
The way you put it across though is really clear and I hadn't seen it as an announcement before - I agree - that is exactly what it was! Wonderful!