A Dream and its Sequel

The first dream: Many of us were on a large wooden ship. It was the size of a supertanker, but it was wooden. I don't know where it was going, and I don't think I ever did learn.

Below deck, on a very large deck, was a smaller ship: not a boat, a ship. As my wife was away, talking with crew or passengers, I was below decks, preparing that ship.

There were two things that were both heavy that I was loading up on. One was crowbars: not a "j" shape crowbar, but more of a "t" shaped crowbar. I loaded about 20 or 30 of them onto the smaller ship. I don't remember the other.

It seemed that I broke out a wall or a deck of the big ship in order to get the smaller ship out, and my wife showed up about that time to go with me. I woke up before we launched the smaller ship.

I had the dream during the time that I was enrolled in a dream interpretation class, so I shared it with my friends in the class. They agreed: The large ship is the Sunday Morning church, and truthfully, I didn’t really know where that was going. My small ship below decks was a heads up: God was calling me out of the established church into something more personal. The crowbars were preparation for me to help others into similar freedom.

What these good people didn’t know was that God had been calling me to do something I hadn’t done in nearly 50 years in the faith: to disengage from my local congregation, and to take responsibility for our own spiritual life, apart from a larger congregation: to become “unchurched.” It scared the stuffing out of me, which may be part of why Father affirmed it in a dream.

Eighteen months later, I had left the Sunday Morning community, and my head was still spinning; this was something I’d never done before, something that I had regularly taught against, that I had prayed against. In that confusing season, I had the sequel to the dream, a dream that picked up right after the point the dream had ended. 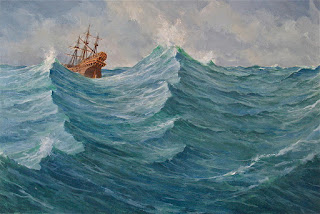 In that dream, I had succeeded at launching the small ship out of the hole in the port side of the big ship. I watched as the big ship steamed on, unaware of our departure. When the great ship was out of sight over the horizon, I realized four things:

1) I suddenly saw my surroundings, and I realized that the only things I could see were waves. I had no idea where in the vast ocean I had departed from the great ship. I didn’t know where I was. I had no bearings.

2) Those waves had appeared as insignificant to the great ship. But now, in my small craft among them, they appeared much bigger. In fact, they were taller than our masts, though they did not threaten to capsize us. Suddenly, the waves captured a much greater portion of my attention; I was now far more aware of what was going on around me. (Note: both the sky and the waves were grey.)

3) I hadn't noticed this before. My small ship still had no sails up, and I'm not entirely convinced that I had sails on board. I had no means of moving, no means of steering my course. I was not anxious about that fact; in fact, in the dream, I was not attentive to it.

4) Everything was so quiet! I could hear everything: the seabirds, the waves slapping my ship, the wind in the rigging.

As the dream ended, I realized that it perfectly represented my life in this season, where I was experiencing things I’d never experienced in my life before:

1) I was lost in a vast ocean: In truth, I didn’t actually know where I was in this great process that God is taking me through. I didn’t have any real reference points that mattered any more: experiential, social, psychological, theological. Everything was up in the air.

2) The waves appeared much bigger: There are issues around, issues that I never noticed before, that were now large and important to me. I had never really taken personal responsibility for my life and ministry before. Suddenly, I was aware of things God was emphasizing that I hadn’t even seen before. And now, I recognized gifts, particularly leadership gifts, on people outside of the traditional leadership positions, where I had never suspected them before.

4) Everything was so quiet: Without all the corporate noise in the background, suddenly, I was hearing Father’s voice so much clearer than ever before.

It was incredibly comforting to have Father re-affirm all that I was experiencing, to know that he had all this in hand. Even though it was new and unsettling for me, it was still completely in his hands.

Thank you, this speaks to me at this very time. Father says it's time to leave the dock, though my ship is a different kind than leaving a church. Thank you for passing on the affirmation.

Thanks for sharing. I too left the big ship of traditional Sunday morning church over two years ago. It felt pretty strange for a while, to be "one of those people". But I am so in love with the Father now in a way that I didn't even know one could be in this realm, and so thankful for all He is showing me and leading me into. More more more!