Some time ago, Jane & her husband John had difficulty connecting heart-to-heart with the people of their little country church. So they decided to invite folks to their home. That went so well that they made a habit of it, inviting folks from the church, and from the neighborhood to their small home for a meal and to talk about life, and how God relates with them.

One week, Jane was cleaning her home for the guests expected later that afternoon, and she took her diamond wedding rings off and put them onto her ring holder on her dresser. They were pretty large diamonds; they’d belonged to her husband’s grandmother, and they were every bit as special as they were valuable. One thing led to another, and she forgot them there when guests started arriving. 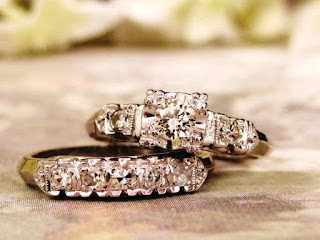 There were several new people, lots of good food, and excellent conversation. Throughout the night, individuals would excuse themselves to use their bathroom, which was accessed through the master bedroom, right past the dresser.

Jane didn’t remember her rings until they’d farewelled their last guest, and sat down to unwind. As soon as she remembered, she jumped up to check her rings, while John did the dishes and put chairs away.

As she rushed to her bedroom, she instantly saw that her ring holder was empty: her rings were gone! She burst into tears, remembering the many people, many of whom she didn’t know, marching past her precious rings, all alone in the bedroom, where anyone could slip a ring in a pocket. She searched the dresser, the floor, the bathroom, in case they’d fallen somewhere, but found nothing. One of her guests must have taken them. Now they were gone forever.

She fell on her bed, weeping. John heard the tears, and took extra time with the dishes, so Jane had time to share her broken heart with the Lord, and that unleashed a fresh wave of tears. She was creating quite a wet spot on her bed quilt, and still she poured her heart out.

As her tears faded away, a black cloud of discouragement started to take its place in her heart. Those rings were family heirlooms, and she’d failed in her care of them. Now she’d never be able to pass them on to her daughters and granddaughters. The black cloud began to settle over her heart.

But before the cloud had completely settled in, a small voice whispered, “Check the quilt.”

“Check the quilt.” Then no more came.

She sat up and looked around. This quilt had also been in her family for generations. It had been hand-sewn by one of her great grandcestors as her wagon train made its way to the Northwest.

Check the quilt? What could he mean by that? She looked more closely at the quilt, noting the even stitching, not noticing the great wet spot from her tears. Eventually, she worked her way to the corners: her grandcestor had sewn a few coins into each corner so that the quilt would lay flat. It felt like four quarters in each corner.

“You’re getting warmer.” More of a thought than words. She examined the four corners, wondering what she should do next. Eventually, with a mental shrug, she got her seam ripper from her sewing kit, and, gritting her teeth, she opened the stitching holding the quarters in place.

Working carefully, to do as little damage to this family heirloom, she opened the seam, and four quarters fell into her hand. Her eye caught the nineteenth century date on the top quarter, and thought about her ancestor’s sacrifice to make the quilt. She picked up the top quarter with her other hand; the one beneath it was even older.

Now interested in the dates, she picked up the next quarter, and there, in her hand, between the coins from a century earlier, were her diamond rings that had just gone missing this afternoon.

She wept some more, but these were tears of joy.