Responding to this Election

There are maybe two primary kinds of people reacting with distress to the election results.

One kind is all about outrage. That outrage has occasionally been public and violent. There’s much evidence that at least some of the protests are paid events, staged for prime-time television, but the outrage is still real.

Many of the faces and voices in the media are outraged, of course, and in the halls of power. Some are willing to express it; others less so, hiding behind explanations and accusations. 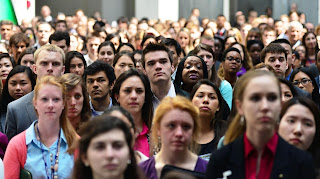 The other, larger, and often younger population are nearly invisible, feeling wounded and betrayed. How could these neighbors whom I’ve trusted vote for such a hateful man and such a hateful agenda. They truly fear for their future, for their lives and well-being and those of their friends. Their fear – whether we understand it or not – is very real, their pain is real.

This is the group that I’m most concerned about.

Many of these are Millennials, the generation that is only now stepping into power. They are young enough that they don’t understand what this election was reacting against. And while they recognize that there’s bias in the media, they are still a media generation, and the media still speaks to them and for them.

If we wanted to alienate these good people, if we wanted to drive them away from us, from ever respecting us, then we should condescend to them, we should disrespect their fears and mock their pain. A number of Christians, a number of conservatives are doing exactly that.

And of course, Internet memes are good for this. And while a few are genuinely humorous and make us laugh, they drive a wedge deeper between people, and a thorn deeper into their hearts.

“But they’re believing a lie! I must convince them instead of the truth!” Balderdash. Do you remember the Bible-thumping trolls who haunt Facebook and other online communities, mercilessly wielding their version of Truth? Do you remember Westboro Baptist and their hate-fueled vitriol? This need to “convince them of the truth” is what motivates them. Don’t be like them.

Honestly, we don’t have the authority to speak truth to anyone until we’ve helped them deal with the pain they’re feeling. Have you ever noticed that whenever Jesus taught truth it was always in the context of healing their pain: healing the sick, driving out demons, raising the dead, multiplying food. The only exception was when he was talking privately with his disciples.

That’s a really good course of action: start with healing. We can heal supernaturally; that’s always good. We can heal through social means: food banks and street missions need our help in this season more than any other. We can heal through personal means, listening to their pain, and loving them eye-to-eye, heart to heart.