Assisting During the Glory 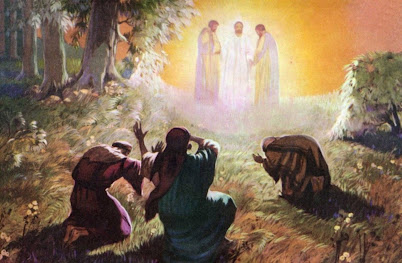 During the Transfiguration (see Mark 9), we see this interaction:

“[Jesus’] clothes became dazzling white, whiter than anyone in the world could bleach them. And there appeared before them Elijah and Moses, who were talking with Jesus. Peter said to Jesus, “Rabbi, it is good for us to be here. Let us put up three shelters—one for you, one for Moses and one for Elijah.”
Then a cloud appeared and covered them, and a voice came from the cloud: “This is my Son, whom I love. Listen to him!”

Father showed me some more of me in this story, today. It wasn’t about Pete freaking out by his mentor glowing in the dark. It wasn’t about him consulting with a couple of (presumably) dead guys. That’s gnarly, but we’ve seen that for years.

We know that Pete proposed putting up some buildings because he was freaked out. But I’d never before noticed that the fisherman was proposing a construction project to Jesus who was a) a trained carpenter, and b) the Master Builder of … well, of everything.

And I realized how many times I’ve done that: offered to do “something that I can do” to my king and mentor who a) can do it better than I can, and b) has seen this opportunity from before the foundation of the world, and already has a plan for taking care of it.

But I come toddling along, feeling kinda powerless in the situation, wanting to find SOME way to be useful: “Here, let me do that for you.” Kinda missing the point.

One of the main reasons for this whole experience was that JC wanted his friends to see this thing happen. He wanted to be more fully known by them. He’s not showing off; that’s humility: being known as he really is.

And another of his reasons for this encounter was that he wanted counsel from a couple of guys who had been trail-blazers in their own day, and who had already made their own way through death (in two completely different ways) to the other side. He needed their support.

And here comes Pete, toddling along, feeling kinda powerless in the situation, wanting to find SOME way to be useful: “Here, let me do that for you.” Kinda missing the point of what was happening there.

As I read the story from Pete’s perspective, I reflect on how he could have been less stupid here. Maybe he just shuts up and takes it all in. Maybe he waits until the meeting is over and shakes hands with Mo & Eli. Maybe he just makes a list of questions he wants to ask on the way down the mountain.

I dunno. I’m still working on that, because I want to learn how I can avoid cramming my foot in my mouth the way I’m good at doing (and the way Pete is good at doing).

I sure love Father’s gentle reminder: “Guys, this is where your attention needs to be: Listen to my Son!”

This is an awesome family relationship that I’ve been brought into. I’m loving he (hard) process of learning how we do things in this family.