An Encounter in the Woods

I don’t know if that’s a radical thought for you; it was for me. It caught me off guard, and I stood still on the bridge thinking about it. 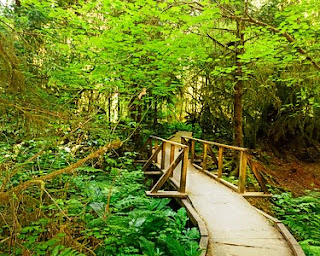 As I was standing on the bridge, the thought occurred to me that the cross was not what I thought it was. I had been working from the assumption that the cross had been a rescue mission: that it had allowed God to love me because it put me in Christ (or put Christ in me) and certainly Christ is quite lovable, and so I had merely been caught up in that love-fest between the Father and the Son. I understood that in Christ, I was loved; apart from Christ, I was not so lovely, not so lovable.

Without the cross, I’m just a sinner heading for hell. God didn’t plan hell for me, of course, but when I rebelled (when I chose a way that wasn’t his way – when I sinned) hell was the consequence of my choice. I discovered that, fundamentally, I saw myself as the sinful man, separated from God, thankful for the rescue that the cross provided. I was really quite grateful for the rescue!

And there’s truth in that. But standing among the mosses on the bridge, I realized that the cross did not somehow manipulate God into doing something that wasn’t in His mind already. There in the woods, He took me back to before creation, before He declared “Let us make man in our image.” By the time He made that declaration, He would have already been committed to the process: to the creation of a species in His own image, and the creation of a universe in which to place that man. Standing on that bridge, I was caught off guard by a vision.

In the vision, I saw the omniscient God considering the process of creating man before He took the final step of creation. In that instant, I saw that because He is omniscient, when He considered creation, He also saw all that comes with it; He knew that if He created a species in His image, they would be loving, because He is love. They would be creative, because He is creative.

But in order to create us – you and me – as a loving, creative people, for it is us He is contemplating, He must create free will, for love that comes from a will that is not free is not love at all. And free will – truly free will – will lead to someone among the billions of individuals choosing to sin. In point of fact, it has led to every single one of us sinning, and so our omniscient Father knew that as He considered creation, it required a cross; if He created us, then He must die for us, and He knew that before He made up His mind to create a race of men in His image.

But because He is omniscient, He saw more than just the concept of a species of beings: He saw the members of that species. Standing there obscured by the vine maple, I looked up and it was as if I saw God looking down at his creation from that moment, as He was thinking about the creation He would make.

He saw Adam and Eve eat of the wrong tree, but his eyes didn’t linger. They looked beyond them to their children. All of humanity was in his gaze. I watched his eyes light on different figures in history, some were heroes, some were villains, most were neither one. He saw every one. He took it all in. This is what creating mankind would result in.

And then he saw me! I caught my breath.

Before He made me, He knew me, yes, that’s true. But before He had even made up His omniscient mind about whether to make a creation or not, He grasped that once He said “Let us make man,” that would result in me.

And now, before He had committed Himself to creation, He was already committed to me in love; He was hooked. He had fallen in love with me. Even though I didn’t exist yet, and I would never exist unless He chose to follow through with creation, yet He had fallen in love with me, and now He must follow through with creation, with the cross, in order that He might know me, that He might share his heart with me. His heart had been ravished. He was smitten. With me!

And suddenly, I saw the cross differently. He didn’t send His Son to the cross as a rescue mission, to deliver me from all the crap and slavery I’d gotten myself into. And He didn’t love me because finally I had come Christ and He certainly loves His own Son, so I get included in that love too.

No! The cross was conceived, all of creation was conceived, planned and carried out, because He loved me! God had fallen in love with me, and He was going to do everything He could do to get to me, to find me and wrap His arms around me. He would climb any mountain to get back to me, so to speak; and that’s what He was doing.

That’s what the cross was: It wasn’t the goal. It was the means to an end, and the end was me. Standing there in the woods, leaning on the railing of an old wooden bridge, I looked up into eyes that were seeing me from before “Let there be light,” from before “Let us make man.” And those eyes were falling in love with me – had already fallen in love with me. And He would do anything, absolutely anything, in order that He could be with me.

Later that week, I got up the nerve to share this experience with my bride as we headed out on our date night. That was difficult because it was so personal. And as I shared it, I realized that it sounded strange. The immediacy of it began to fade as I spoke of it, and I began to question my experience, maybe even my sanity.

We got to the restaurant, but because it was so full, we ended up seated at the bar. And at that moment, the bartender changed the station of the music to an oldies station. They’ve never played oldies there.

Suddenly, Diana Ross started singing, “Ain’t no mountain high enough, Ain’t no valley low enough, Ain’t no river wild enough, To keep me from you!” and I recognized the voice of the One who had spoken to me in the woods.

I literally cried in my beer. Yeah. You love me that much.

And yeah. He loves you that much. That much.

Such a good insight! I love it!
Isn't it breathtaking to consider that His love came first? Wow!
Thanks.