Someone asked me how I respond to Bible Thumpers. Boy did that make me think.

Yeah, that’s a big issue. It’s big enough that Wikipedia has a definition of a Bible thumper (aka “bible basher”):

“Someone perceived as aggressively imposing their Christian beliefs upon others. The term derives from preachers thumping their hands down on the Bible, or thumping the Bible itself, to emphasize a point during a sermon.” 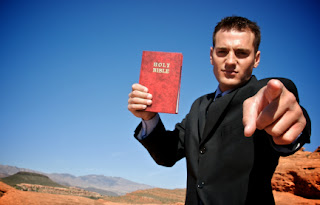 In my experience, this very often manifests as people blindly quoting scripture in conversation, mistakenly believing that this proves their point. Most people can tell when they’ve entered a conversation. And unfortunately, it seems to happen at holiday gatherings more and more.

I used to be a bible thumper. I’m in recovery now. Here’s how I try to respond to bible thumpers. I hope it helps bring freedom to you. It’s a tough one.

I can’t say “Here’s how to do it.” I can only say, “Here are some things I’m trying.” Some are working better than others.

* Make peace with myself about not needing to have all the answers. This one was huge for me.

* If I have to quote a verse as if it were a platitude, I explain quickly how this applies in my world.

* I do not look to thumpers for help; I do not expect them to minister to the real issues of my heart, and I do not let down my defenses to let their religious spirit have access to my soul.

* If someone quotes verses at me, I sidestep the verse. “I’m not interested in your skills with copy and paste [or with quoting verses]. I want to know what you actually think.” Thumpers find this confusing, but a few get it, some sooner than others.

* Occasionally, if I sense it might do some good, I’ll try to bring some sense into the conversation, asking them to support the doctrine they’re proclaiming. Very often, just looking at the context of (verses immediately before and after) the verse they’re wielding is enough to take some of the wind out of their sails.

* If the thumper gives me permission, or if the topic is a big deal, and there are lots of people by the thumpage, I’ll attempt to correct their abuse, either by addressing the topic with more than verses and stale doctrine, or by talking about what actual conversation is like. I hate doing this because I don’t love confrontation, but some situations call for it.

* Then afterwards, I try to go out of my way to make conversation with the thumpers whose thumpage I have just upset. My goal is to hear what they actually think on the topic, and to engage them on why they hold that so strongly, but I’ll take small talk if that’s all I can get.

Note that I am absolutely NOT trying to minimize the effect of the Scriptures in my life, as some thumpers have accused me. Not at all. But I want the Scriptures to work in me, guided by Father’s hand as the living and active scalpel that they are (see Hebrews 4:12).

So. How do YOU respond to bible thumpers?