It’s Christmas Eve. My home is filled with laughing children. My son is making something wonderful in the kitchen. My wife has forbidden any entry into the bedroom until the last few presents are wrapped. A video game is blaring in the living room, and power tools are finishing up a last-minute gift in the shop.

My home is a very busy place. And honestly, I love it.

But as much as this night is about family, it’s even more about a Birth. I stepped outside to visit with Father about it, to remember that Birth with Him.

Immediately, I had an image of Him, as eager as a grandchild would be, clapping happily, dancing from foot to foot: this is His Happy Dance!

For me, the laboring woman and her not-quite-husband are separated from me by twenty centuries. But as God is Lord of Time (among many other things), He is right this minute, dancing with joyful anticipation over this impending Birth.

God, being omniscient, knew of the failure of man in the Garden before He even spoke the words, “Let Us create man, in Our image…” Before he ever even scooped up mud and shaped it and prepared it to hold His Own breath, he knew that man would fail the test, would eat of the wrong tree, would submit to the wrong voice, and would be doomed to death.

But God, being the best in the universe at planning ahead, already knew that He, Himself, in the flesh and blood of humanity, would die a gruesome death in a backwater, occupied nation in the geographical armpit of that planet in order to establish a New Covenant with them. How he looked forward to that!

And He knew that before God could die for man, God would have to become a man. And this! He looked forward to this with such joy! 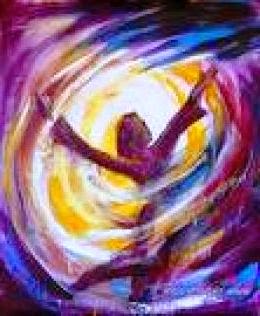 And tonight is the night!

The most patient Father that has ever existed has been eagerly, joyfully anticipating this night! This is the beginning of the Covenant that He’s longed for since the Garden: when he would have a nation of Kings and Priests who would know his Father’s heart and love Him as freely as He loves them!

The cross? That torture, that pain, that indescribable humiliation? That was nothing! Nothing! Less than nothing! He would pay ANY price for the privilege of whispering of his love to his wayward children. If there could have been a greater price that could ever have been paid, He would have paid it without hesitation for the children that He treasured above even His own eternal, omnipotent life!

And tonight is the night that it all began.

Tonight! As Mary is breathing hard and sweating heavily, as Joseph is wringing his hands and feeling nearly (but not quite) useless in the face of The Birth, God Himself is dancing with joy! Angels are ministering to the new mother and anxious dad, but God is laughing and jumping and shouting his joy to the heavens!

This is the night! This is THAT night.