The Controversial Source of the Law.

God offered, “You [] will be for me a kingdom of priests and a holy nation.” (Exodus 19:6) God offered a covenant of equals: you and me, face to face with God with nothing in between. Peers.

They rejected his offer, and counter-offered, “Speak to us yourself and we will listen. But do not have God speak to us or we will die.” (Exodus 20:19) 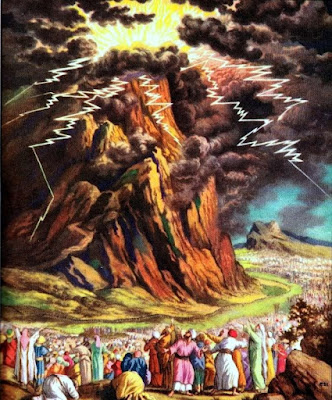 They proposed the intermediary, which is what a priesthood is. And they promised to listen. The original language contains a hint of obedience, but no, this isn’t an express promise (which was probably good).

They rejected the peer relationship, the covenant of equals, and they substituted a vertical relationship: big god with the rules (and therefore the spank stick), and the only way to know him is through a priest. Ick.

So God was backed into a corner: either relate to people through a priesthood and rules, or walk away, wipe his hands clean and start over again.

But he’s not One to walk away.

So he submitted his mighty self to their silly little demands. It was better than no relationship at all.

They wanted a priesthood: Moses started it with Aaron, and it continued on. That’s what Leviticus is all about. Don’t you love Leviticus? Isn’t it fun to read?

But they broke covenant before the rules were even delivered (remember the golden calf?). Then came more rules. And they failed those, so he had to give them other rules, more specific rules.

If you have rules, then you need to have an enforcer, and that is ALWAYS your god. So God was party to a covenant he didn’t want, and was the enforcer if the people didn’t keep their end of the covenant.

No wonder God was glad to be rid of that covenant. “By calling this covenant “new,” he has made the first one obsolete; and what is obsolete and outdated will soon disappear.” (Hebrews 8:13)  He never wanted the stinky old rules or the silly little priesthood in the first place.